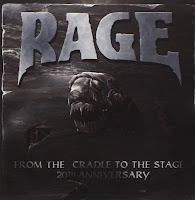 As prolific as they've been through the decades, from lineup to lineup, one thing we can say for Rage is that they've never been the sort to deluge fans with a ton of audio-only live material every couple of years. Maybe a couple of bonus tracks here or there, but when they really go for such a product, they make sure it's something substantial, like their 2015 box set The Refuge Years, which contains a number of live CDs in addition to the remastered run of albums with their classic late 80s-90s power trio roster of Wagner, Schmidt and Efthimidias. They had also put out a handful of videos through the years, one of which was released as a counterpart to this particular double-album, From the Cradle to the Stage, a 20th anniversary of the band's foundation as Avenger, that includes a good selection of material covering much of their career.

This of course features their SECOND impressive power trio lineup, Wagner joined by seasoned skin pounder Mike Terrana and sleek guitar hero Victor Smolski, and it was coming hot off two of their better albums in some time, Unity (2002) and Soundchaser (2003) which had been the most excited I was for their material since the dawn of the 90s. It was recorded in Germany and features well over two hours of material, with a number of old favorites and other tracks that were running current to their tours. The performances of this lineup do a lot to 'package' the earlier material up to their 21st century aesthetics, so it sounds fairly consistent in the hands of this lineup. Peavy had lost some of his shrieking range through the 90s, so by the time this came out he certainly can't approach the older tunes with the same level of fanatical pitch, however when tackling a "Suicide" or "Invisible Horizons", he manages to make it work with the slightly less adventurous, limited range, and he can still go higher occasionally. The important thing is that the wild personality he generates with his voice is still here in spades.

Otherwise, the band sounds ferocious. The bass is thick enough and fluid, Terrana beats his kit like it tried to burn down his house and run off with his wife, and Smolski sounds just fantastic, with his frenetic, dizzying leads and even capturing a lot of the old flashy squeals and tricks of his forebears from the 80s. The guy is just fucking nuts, and as much as Peavy has always been good at picking his six-string slingers, it makes me really wish he was still with the band this last decade. Even in spots when I feel myself wishing there was a tight rhythm player to enforce the power of their material on the live, Smolski's penchant for flair totally fills that void. As for the production, it's quite clear, you get a healthy helping of the audience balanced against the guitars and percussion, while Wagner's howling still manages to sit right on top, even if by this point it might have been the weakest link in the band's entire execution. Terrana and Smolski both have extensive solo tracks which are a lot of fun, and you get a great balance of being hit like a truck on most tracks, or even enjoying some of their lighter, more sensitive material like "Back in Time" from their Ghosts rock opera album.

This was really my first exposure to a full-fledged Rage live recording, after being a fan for a decade and a half, and while it has a few vocal flaws, it's just a damn solid experience with the band coming off just as enthusiastic with the tunes from all their eras to that date. One of the better Teutonic power metal live offerings I've got lying around the place, especially because they've always had such a different sound than so many of their peers.

Posted by autothrall at 7:42 PM