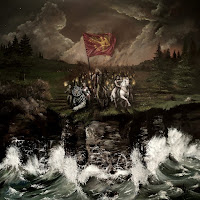 Le Tyran et l'esthète is the fourth full-length album for another French hopeful, and one that definitely has its ducks in a row in terms of sleek production and instrumental finesse. Largely traditional black metal of the North European variety, there are just enough complementary ideas to keep Les Chants de Nihil from seeming overly reliant on retreading the same ground that has already been churned into mud. This isn't as esoteric or unique an effort as some of the band's better known peers, but I can assure you that there some progressions or unexpected moments which await you around the corners of this album that instantly elevate it beyond just your average, well-intentioned blasterpiece; clearly the sounds of a seasoned group which has been paying attention to its medium at large.

The cover painting is quite good here, and actually by the vocalist/guitarist Jerry himself. This rush of cavalry and infantry towards a frothing shoreline well represents the storming, surging sound when the band is firing on all cylinders. Effortless blasting, frenetic tremolo-picked note patterns which can bleed out melodies reminiscent of Scandinavian greats, but add to that just a small hue of warmer, more textured chords that wouldn't be out of place on one of Enslaved's more proggy, atmospheric albums these last ten years. The mix to this album is excellently balanced, with a lot of depth between the foremost melodies, harsh rasping vocals, and soothing, sailing chord patterns, especially where the album slows down to a more moderate gait like the lapping of waves against some hull. They creative very emotive inclines amidst the roiling aggression, but where I get most surprised are spots like the depths of "L'adoration de la Terre" where they almost take on a Voivod-like oddness, or Ode aux résignés which has this gradual move towards the rushing tempos and lets its bass playing groove along to carve out a lot of its momentum.

The black metal vocals are somewhat standard in style, although tempered by the French accent and quite resolute, but they will mix these up with some somber choirs or other bits to prevent any monotonous approach, and frankly for what they are the guy gets appropriately sinister and bombastic. Again, it is another actual member of the band who steps up for a double-shift, 'Mist', who does the recording, and it sounds absolutely clear and lethal. I see a promising studio for this guy, not only within his own projects but with other striving acts who hear this. While, broken down to its many components, you might not find many of the riffs or songs to be super memorable on their own, it's another sum package which is entirely competent, occasionally interesting and certain to pique the interest of a cross-section of fans into medieval or pagan black. Detailed, driven, worth checking out.

Posted by autothrall at 1:58 PM