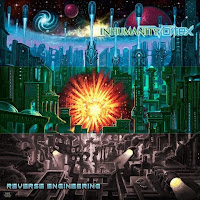 Inhumanity Vortex (renamed from Inhumanity) is a one-man Polish project which has been feeling around with a handful of demos for over a decade now, but is now finally getting off to a more 'official' sort of release through this six-track EP. The brainchild of guitarist/writer Tomasz Dziekoński, he has added a handful of session musicians to really round out the intensity on exhibition, including Kévin Paradis, the current drummer of French brutes Benighted. The result here is an EP that feels a lot more professional and polished than you might expect, which delivers a consistent and level pummeling but just enough of a more complex musical flavor that you'll find a lot of interesting twists and turns if you're compelled by that more progressive end of the death metal spectrum.

I suppose a lot of folks might refer to this as 'cyber death metal', and thematically or sonically that isn't far off, but it's far less focused on industrial or electronic components as a group like Fear Factory. There are some synthesizers and other programming bits involved, but at its core this is neck jerking, frenetic death metal which is possessed of both style and groove, and science fictional concepts which feel as if the music actually represents them pretty well. Groups like Cynic, Obscura, Decapitated, Gorod, and Gorguts came to mind, or perhaps Pestilence if you were to mix up their Spheres album with the more modern groove aggression of a Doctrine or Obsideo. Busy guitars that involve lots of dissonant tones blended into the palm muting ferocity, and often erupt into spurious and fitting leads. Just enough futuristic effects are added to keep you in mind of its futuristic leanings, but there's a time and a place for them and for much of the duration they're just committed to a more consistent, bludgeoning effect. While the bass sounds good and is fitting to the mix, and the gutturals, if a little monotonous, also complement the style well, this is really all about those guitars and Paradis' drums, which are both awesome.

Rhythmically, the five heavier tracks here differentiate themselves rhythmically while still flowing well on the whole, but I was also really digging the instrumental "Through the Infinite", which brings out more of the guitar synthesizer and cultivates a more epic feel than its neighbors, obviously implied with the title. While this one might not have suffered at all from having vocals layered on it, their absence does come with a degree more creativity that was appreciated. On the whole, though, if you're into the school of modern/tech death but don't have any use for excessively wankery, perhaps enjoying that sense of fleeting futurism a lot of groups like Neuraxis used in the 90s and 00s, then Reverse Engineering is worth a listen. It's not always catchy, but it's pretty damn solid, and kept under control to provide an effective impact without any need for flashy frivolities and masturbatory over-indulgence. Inhumanity Vortex knows its business, and with a bit more experimentation and variety, perhaps a little more experience with melody against the harder hitting tunes, this has all the potential of a standout act.