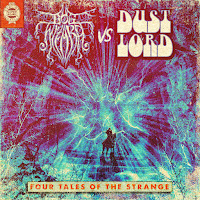 I've already covered the 2020 album From the Mire by Michigan's bong soaked Bog Wizard, a rather adventurous hybrid of acid washed stoner doom metal and fantasy gaming nostalgia. They've returned here on a fitting split EP with Colorado's Dust Lord, another newish act which has also independently released its debut last year. Sonically, the two bands are a fine pair, although there are some slight deviations in their thematic and atmospheric approaches which distinguish them. Ugly, huge doom metal tones, taking the Sabbath roots and drenching them in sustained distortion and vocals that occasionally make Ozzy sound like a harmless puppy. That's not to say we're dealing with songwriting on a master level like those British originators, but I think folks who are really into this saturated, evil stoner crush have two hopefuls here that, with a little tweaking, could become contenders to the thrones occupied by acts like Electric Wizard and Bongripper.

Dust Lord has the bolder production of the two, with voluminous guitars that groove along your nerves with note progressions that might not be original, but do their job. I'd say aesthetically this is the drier of the bands, going more for an in the in-the-face, traditional fare. Take a group like Fu Manchu and dial down the party and up the crunch levels. Interestingly, the first half of their first track, "Not Men, Not Women, Not Beasts" is a slow, loping desert-camouflaged sasquatch that then picks up with a slightly more uptempo stoner/metal with some harmonies, that introduces us to the pissed off vocals...I found this a bit more entertaining than what led into it, so perhaps that first half went on a bit long, and this is a crime also committed by "Career Opportunities", a lower drudge that also improves once the vocals and higher guitars arrive...just check out that fuzzy, mid-90s Cathedral-like break around the 6-minute mark when he starts spitting out the venom, that's what I kind of wanted the whole time.

Bog Wizard fares a bit better with me, I just love their gradual atmospheric builds, created by clean guitars and feedback before the molasses-thick marsh guitars start to ooze along into the track. I think the vocals on this sound even better than the full-length album, eerie post-Osbourne lines dispersed with some growlier vocals. The little drum fills are quite nice, giving the muck-tinged, steady rhythm guitar a little more of a 'march' feel. The stuff is still heavily rooted in fantasy, with tracks called "Paladin of Death" and "Gelatinous Cube"...now, obviously, there's a BIT of a bias with me on that last one. The G. Cube is my favorite D&D monster...I own the limited edition Funko Pop!...it's presence in Pixar's Onward is one of the many reasons that was one of my top movie picks of 2020. I'm not even a big fan of gelatin or Jell-O or Bill Cosby or anything, but I just love that corridor-cleaning atrocity and its slow, measured, flesh-absorbing menace. This tune is super interesting...from the chuggy rhythms that set it up, to that break in the middle with the ominous clean guitars that almost sound like drawn out, melancholic surf rock, the tinny little cadenced beats, and then the fucking FUZZ ERUPTION. This is actually music that a Gelatinous Cube could get down with, and I have to respect it for that...

All in all, Four Tales of the Strange is a decent if slightly lopsided effort. Dust Lord has the goods, but hammers them over your head after too long of a setup, whereas Bog Wizard is more interestingly composed in its hypnotic, subterranean aesthetic, meandering but only in a good way. My wife and sons don't like me doing drugs, but I can settle for this, doping up vicariously through the doom.

Posted by autothrall at 2:48 PM