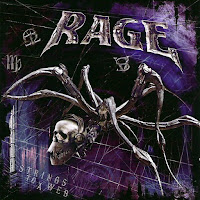 Strings to a Web arrives with a lot of technical finesse and modern studio gloss, thanks to Victor Smolski using the album as a sort of expose for his capacities as a performer. I mean, if you've got it, flaunt it, and this man clearly has it, but occasionally it seems like that level of flash is being committed to a rather hollow exercise, that every nook and cranny of some of these songs is to be filled up with some little fill lick that demonstrates the dexterity and ability without really enhancing the actual power of the track. Fortunately, it's not a total deal breaker across the entire album, because the guy comes up with a lot of of really cool progressions in there that also keep the listener's attention when the meat of the song might not. His rhythm guitar tracks are also fairly complex, so that the album overall feels like a more complex Unity, with all of the classic 90s motifs of their sound in place...the sort of warm, metropolitan vibe to their writing, the lack of higher pitched Peavy vocals which had been a sad state for quite some time leading up to this.

That said, when it comes to his lower range, Wagner sounds quite good in the mix, he's captured so clearly that you can make out all the grit under the syllables. Hilgers drumming here is no joke either, lots of detail to his fills and even just when he's laying out a simple rock beat below Smolski's bag of tricks. Strings to a Web exhibits a fairly wide range of tempos and dynamics, drawing upon all the influences of thrash, speed and power metal that had characterized the band's ascent through the prior decades. The songs are well written, even if there's a tendency to go a little overboard, and really the only thing they suffer from is not having those extremely catchy guitar and vocal hooks which were what drew me to the band in the first place in the 80s. Instead, this is a showier, arguably more progressive band keeping itself affixed to its contemporaries...say what you will, but this sounds like a Rage album coming out in the year 2010 and a band that hasn't yet run out of ideas, even if some of the feel of the vocals and riffs on this does recall a lot of Soundchaser, Unity, Missing Link, XIII etc, while adding just a fraction more hustle.

The "Empty Hollow" suite dominates the middle of the album, five tracks which incorporate some of the symphonics that they'd been using up to this point with their 'Lingua Mortis' concepts, and here there are some parts which recall the album Ghosts, only with the more technical guitar-slinging. Some of this is quite good, especially the track "Empty Hollow" itself or the shredding title track. But then they throw a pair of softer, moody pieces in there like "Connected" which didn't resonate much with me. Some of the most interesting tunes come after this section of the disc, like "Saviour of the Dead" with its groovier low-end riffs that at first seem a little cheesy but morph into some really catchy bits with Peavy using some low vocal effects. But they'll also throw out another weak ballad like "Through Ages" in amongst the more raging (haw haw) numbers. All told, it's a solid if not entirely consistent album which is a good flex of the chops but doesn't succeed in transforming them into the level of earworms that I had long associated with the band. I'll spin it to be impressed once in awhile but there aren't many playlist-worthy tunes among its 55 minutes of style-slightly-over-substance. The spidery Soundchaser on the cover is also a fun pairing with the album title.

Posted by autothrall at 1:37 PM