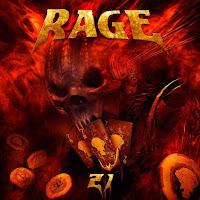 I quite liked the "House Wins" intro to this album, it's little more than a few sampled voices describing the mechanics of a card game that ties in with the title, but the backing ambience has a surprisingly Rage-like feel to it that seems as if it's just going to barrel into the most epic of proper heavy tracks. That's not exactly what happens with "Twenty One", but it's definitely a solid cut with a good amount of heft to it, and the flashy breaks of Strings to a Web are somewhat subdued here in favor of some straightforward, driving aggression. In fact, I think while Smolski still takes flight as the guitar hero, he's balanced so much better against the rhythm section here...the material just feels meatier and has some more emotional punch to it as well, with Wagner adding some good old anthemic German heavy metal choruses here...

His voice isn't at the height of his younger years, but he stretches it a little more and it sounds as smooth as its going to. The songs have a good range here from bludgeoning low end power metal to a few more showy hard rock tunes where Smolski spikes up the punch with his effortless solos. You'll notice that Peavy does use a LOT of harsher vocals here, which sound a bit processed and goofy but they obviously thought they were cool enough to use multiple times, and I don't mind even if it doesn't really achieve the end goal of being able to rub shoulders with all the younger, heavier thrash or death metal bands. The real strengths here are the instrumental performances and production, the guitars are nice and heavy, the bass doesn't do much interesting but it feels a little weightier than it did on the prior album, and Hilgers drums are just a powerhouse, if you had any doubts about his ability to replace some of his predecessors they should by this point have all been quelled.

Ultimately 21 sounds like a heavier 21st century counterpart to earlier 90s records like Black in Mind or End of All Days, the punchier, cubicle thrash meets Euro power metal. All three of these guys 'showed up', stomped around for nearly an hour, and put out another ten tunes which mesh seamlessly into their sizeable legacy without totally standing out. It's another of those Rage albums which I can get fully immersed in while listening in my car, but even 8-9 years later there aren't a bunch of chorus hooks or riffs that I can pick out a lineup of their last two decades of material. It's great to hear them firing off such energy so deep into their career, and while some might be bittersweet that this was Victor Smolski's final studio full-length within the band ranks, it's a further testament that he stepped in there and helped define a whole new era for this underappreciated veteran, and himself blossom into a guitar hero with the style and versatility that can keep him on the map with future projects...he's almost like a gestalt of all Ozzy's guitar gods and their particular quirks, but with the added heavy interest in the neo-classical.

Posted by autothrall at 4:26 PM