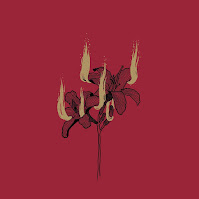 Hyrgal had already impressed with its 2017 debut Serpentine, and three years later they've returned with a worthy follow up that raises its value on the French black metal underground. Somewhat less experimental than better known peers like Blut Aus Nord or Deathspell Omega, they nonetheless approach the medium from a somewhat inspired, unique vector which threads traditional, blasting European black metal with a lot of bleeding, wistful melodies, which often give off the impression of a blackgaze or post-black metal band, but they cling this all so tight to the skeleton of the genre that it perfectly blends the conventions of that more contemporary variant into the savage framework of the original. The seven tracks at around 40 minutes border so much on the familiar, while giving you just a fraction more interesting atmosphere that will keep you transfixed a little more than a more predictable, ordinary genre act.

The drums are set fast and turbulent since a great deal of the riffing is of the hyper tremolo bursted variety, and they maintain a somewhat organic feel, with the kicks and snares almost inhabiting these different planes in how they're textured along with the walls of guitars. Along with the more aggressive rhythm guitar chord patterns, there is almost this constant second dimension through the higher pitched pickings, flurries or leads which often sent me spinning off in two directions. They do have some ambient passages, or slower, sparser sequences where they let feedback or simpler, high note structures ring out and bring on some welcome balance against the unhinged speed, and I also liked that the bass became a bit thicker, thudding and more prominent. They'll also experiment a bit more with whispered vocals as opposed to Clement Flandrois' very pissed off, genuine snarls of rage; and yet the hideousness inherent to that inflection is a nice contrast against the streaming melodies and dissonant upper atmosphere to the effort.

Combine this all with a sweet digipack featuring some cool translucent pages, classy lyrical script and some architectural artwork, and this band has just transformed into something fairly top notch that a lot more followers of their style are hopefully paying attention to. Fin de règne is a practiced, poignant sophomore which kept me guessing. Enigmatic, artistic and tortured without becoming too chaotic for its own good, engaging the listener through each twist and turn, distinctly French with the raving, pissed off vocals and holding its own against the veteran bands from its own scene, Hyrgal's lightning has struck twice already and this is not an outfit to be passed on or ignored if you enjoy memorable black metal with enough depth and ideas of its own, but can still rock your face off when it bares the bloodied Mayhem, Hellhammer and Darkthrone fangs as in the intro to "Glyphe de sang" which had me punching my desk until the speakers clipped. Great shit.