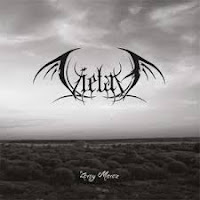 Zorny maroz is a first time exposure for me to Belarusian one-man act Vietah, thanks to a series of slick new vinyl reissues through I Hate records of Sweden. Black metal solo outlets these days tend to run a wide gamut of particular sounds, from the most raunchy and undercooked to feats of instrumentation and craft that would leave most full line-ups bewildered, but Antarctis tends to live up to his name as a purveyor of isolation and cold majesty. This is achieved through fairly minimalist sound structures that involve raw but brazenly produced rhythm guitars, wistful synthesizer lines, bare beats and the sort of harrowing, over the top style of rasped vocal most find commonly inhabiting the sphere of suicidal and/or depressive black metal, from which torment is wrought at the expense of most other elements in the mix.

Fortunately, Vietah is clearly enough produced that this isn't so much the case, although the listener will take some warming up to Antarctis' style unless he or she is quite used to the stuff. Others might find it a hangup that the guy creates such simplistic song patterns, in which even the barest of synth melodies sheds all notion of challenge or complexity to create a spacious, lulling effect. Added to the aforementioned vocals and guitars, I was most reminded of Burzum here, in Vikernes' 'prime', the Filosofem era. One man carving his sorrows into the flesh of the universe, with no pretense towards musical proficiency beyond his limitations, and no concern for user friendliness when it comes to that bloodcurdling, native tongue, wrenching delivery. Lyrics are ponderous of spiritualism and nature, par for the course of many similar acts, translations including in the packaging, and well enough written if you're a fan of such drifting, nebulous queries into both the lighter and darker halves of being.

The first couple of tracks run on a little long, which is also a staple of this niche, but that doesn't hold true for the remainder of the material, in which Antarctis flexes the creativity a bit with a folksy, pure electric guitar instrumental, and then another pair of tunes which didn't drag on whatsoever, and were coincidentally catchier than their predecessors. I actually really dig it when he's using the cleaner, more conversational vocal, it's like sitting around the fire with some cautionary storyteller, face reflected in flames and moonlight. He also picks up the intensity there a little with more hammering double bass patterns and a heavier feel to offset the atmospherics, and superior synth work. And that is really where appreciation for Zorny maroz is going to fall: in the atmospheric mood sought out by its potential audience. Do you like your black metal to rove across misted moors, eschewing things like progression and originality for bleakness with a few rays of sunlight? Then this might be for you. I didn't feel too strongly one way or the other with this debut, but it's hardly ineffective.