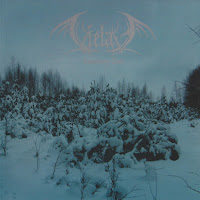 I'm as enamored of the winter landscape photo as many of the musicians who use them as album covers, but certainly the novelty of the practice is long since diminished from the 90s when it had started to become commonplace is in the fields of black and folk metal. This, coupled with the lukewarm reaction I had to the debut record, didn't exactly set expectations high for Vietah's sophomore outing, and yet I enjoyed this considerably more than Zorny maroz. Invigorated, better produced, better capable of fleshing out its more bulky song structures with solid riff choices that build anticipation for what will follow them. Coincidentally, this is a more varied record, and it's moments of instrumental beauty were quite nice touches to the raging but straightforward storm around them.

The comparison to Burzum retains a tenuous grip, but it's been supplanted by a more epic-tinged Bathory style, specifically from the Blood, Fire, Death and Hammerheart era, which is manifest through the synths and guitars when used in tandem, and the more corpulent beats used below them. Antarctis has also improved vocally, shifting from the suicidal, loud rasps of the debut to a deeper, harsh drawl which falls in comfortably between the black and death metal genres. It might not sound as unnerving, nor is it super unique, but it's mixed in with the music much better and never stands out too much for its own good. Otherwise, a lot of structural points here are similar to his earlier material...the wayward, repetitious guitar lines that are often given space to breathe where the percussion falls out, and the riffing is exceedingly simple, though he definitely rips out some more traditional mid-90s patterns that smack of the Scandinavian scene of the time (with the title track here in particular). Some early Enslaved, Immortal. But those spacious, drift-scapes of the first album still thrive on several pieces here, and come across as more poignant.

The guitar tone is bold with an underbelly of raw, especially on the slower grooves which trace their lineage back to Darkthrone and Hellhammer, but will also remind some of Satyricon's mid 00s black & roll style. The contrast of the substantial piano/keyboard interludes to the harder hitting cuts might be too jarring for some, but I had no problem with it, even though I could listen to the former by themselves in many situations without requiring the rest. Translations for the lyrics are once again included with this I Hate Records vinyl reissue, and they maintain the sturdy introspection of the debut, only this time they've got better music to accompany. Whereas I stretched out my listens of Zorny maroz over several days, not particularly inclined to marathon it repeatedly, Smalisty žah definitely had some moments that I immediately wanted to revisit. Vietah was still some distance from establishing a truly distinct or exceptional style here, but this is more than worthy of its predecessor and a clear sign of growth and maturity.