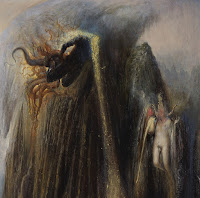 After the staggering madness of The Marrow Veil EP, I was almost taken aback at how deceptively straightforward this new record felt in its opening moments, as if Howls of Ebb was honing in on the more recognizably 'death metal' moments of that recording and ramping up their volume and savagery. Yet as early as the bridge of "The 6th Octopul'th Grin", it becomes obvious that this is all just an illusion, and for all the added 'structure' Cursus Impasse might project, it's just as unique beneath the surface as it twists and molds its progenitor genre into a sickening new form. Granted, those who might have foolishly written the group off due to just how bizarre the geometry of their approach might find this sophomore album a better starting point, but if you were reveling in the offbeat sounds of its predecessors, then this will reward you in spades. Spades plunging into the dank earth below as your body faces interment.

Couple of details I noticed up front: the bass performance here is quite a lot better than on either of the earlier releases, with lots of frenetic grooves and lines that hold their own against the dissonance of the guitar rhythms and the nihilistic guttural vocal. Also, the whole record just feels brighter and more welcome upon the ears, not for lack of trying to grind your mind, but simply by virtue of the production. Far more rhythms and tempos are also present across these tunes than these seven tunes, but they retain Howls' careful balance of overwhelming darkness with just a slight semblance of humor; the bridge of "Cabals of Molder" is a prime example of this, with its lurching, burlesque chugs adorned in all manner of guitar wailing and growls. Excellent music all around, and truly fucking atmospheric and unusual; but it's also self-aware enough to provide 'fun' amidst all the torture and gloom, of which there is a considerable amount. The tracks are also kept a lot shorter than the figurehead for the prior EP, but still manage high levels of internal variety and unpredictability.

No experiment really goes awry. Even the closer, "The Apocryphalic Wick", which begins as this gradual ambient ascent into a spastic nightmare, and features some excellent vocal echo rhythms near the close, feels like a crowning, deliberate achievement. The disheveled riffing is always satisfying, never too 'out there' for its own good, and to contrast this, the lead guitars (also an improvement), despite their elasticity, feel as if they're the most traditional and grounded part of the songwriting. The lyrics are beyond excellent. At the risk of annoying half my friends and having the Man Himself awaken from his grave and slap me upside the head with a tentacle, Howls of Ebb also feels more positively 'Lovecraftian' than almost any other extreme metal act to wear that banner. For the obscure mythology it invokes in its use of language, titles, characters, antiquities. For the nervousness which pervades the songwriting. It does seem like you've come across some priceless, rare tome of invocations of stories that were meant to be hidden from prying eyes, lest all of Man's sanity come undone at a touch of prose. Bury this deep in the stacks at Miskatonic when you finish listening.