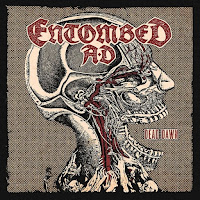 It doesn't seem like a lot of folks have warmed up to this post Entombed mutation, perhaps because of the hard feelings about the dissolution of the original, or perhaps because there is just a level of general exhaustion now for the death & roll path they've continued to travel since arguably Clandestine. Either way, they remain one of my favorite bands to this day, with only one rough patch that I'd rather forget (that dreadful 1997-98 period), and Dead Dawn is yet another muddy jewel in their crown of filth and crud. Because at the end of the day, these guys, whether they're 'all original' or not, they are able to compose simple and effective songs which get the blood flowing, that I feel like spinning over and over. This album hasn't hit me quite as hard as its predecessor Back to the Front, my appreciation for which has only grown over time, but it's a damn sight within firing distance.

As with its predecessor, you've definitely got a heaping helping of Wolverine Blues meets Serpent Saints - The Ten Amendments, the Swedes' patented rock & roll injection alternating and altercating with small fits of Morning Star thrash and groove metal, and even scarcer reflections of the pure death metal of their adolescence (which, I'm in agreement, is STILL their best work). Mid-paced bruisers are balanced out with slower, creeping grooves that cultivate a dank, bluesy aesthetic, but where the band really strikes me is how they integrate these fairly basic riffing progressions with leads and restrained atmospheric melodies that make all the difference in the delivery. "Silent Assassin" manages to morph what is essentially a minimal, barbaric momentum into something altogether cooler with its tremolo-picked chorus, while "The Winner Has Lost" is a meaty speed/thrash tune with several of those mildly atmospheric licks to escalate it. "Hubris Fall" is a slothful, impressive epic. The grooves throughout the record seem swarthy, dour and eternally pessimistic, given an assist by the dense lower end spectrum of the production, and by Olle Dahlstedt's fills.

Leading the troops through this slum of emotional fallout, L-G Petrov's intonations here carry just as much of that nihilistic encumbrance as ever, a grainy and grumbling performance which seems like so much soil that has gathered in a back alley, buried in garbage and inevitably, rage. Dead Dawn is at times pretty peppy in structure, but it's also very, very fucking bleak, moreso than the last half a dozen caverncore discs I've received, at the very least. But this is the bleak that would be manifest through drunkenness or depression, anger and confinement, being sick of being in one's skin, and not some flight of the fantastic or cosmic summoning of an unnameable horror. This is stuff that makes you want to drive a truck into something important, while choking back as much whiskey as possible, seeing nothing but entropy as far as you look. Bone-rattling. Any 12-step program would flee in terror from this case. And to that extent, it rocks its balls off, and as long as they keep putting out material like this, I will give two fucks about any 'legitimacy' of this new brand of Entombed, because when the style is treated with this much respect, and just the right fraction of innovation and nuance, as it is throughout Dead Dawn, then it is quite not-dead.