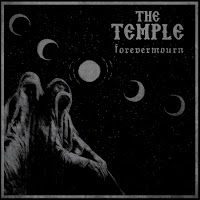 Greeks The Temple are part of a new wave of European acts who pay either conscious or unconscious homage to the crushing, dreary, Gothic doom foretold by bands like Candlemass and Scald over the decades past. Slower paced, mournful rhythms driven by a straight rock beat, with distinct vocals. Never devolving into a morass of riffless sludge or boredom, or dragging their songs out to the point of insidious repetition. Sabbath is certainly a reference, as they are with all bands in this tradition, but The Temple layers on a lot of humble melodies that give the Forevermourn's compositions a slightly more uplifting edge to the melancholy on exhibit, and many of them feel as if they were forged in the fires of traditional British heavy metal, like a more creeping echo of classic Maiden harmonies adapted for a funeral.

Frontman/bassist Father Alex has a clean, mid-to-upper range which falls between a higher pitched Peter Steele and the Finnish Goth metal stylings of a band like To/Die/For or Yearning. A chant, a crooning effect. Consistent above the slough of sadness created by the guitars, but never really throwing anything from left field, so his process does feel rather predictable as you sojourn across the seven cuts. This is also due largely to the fact that they very often play with the same structure and tempo, occasionally added some bombast with double bass drums, or slowing to an even more sluggish crawl in sequences that feel like more funereal doom without the gutturals. Some of these passages, like in "Death the Only Mourner" really shine, the vocals and sparse chords coming together with some real emotional impact. The bass is also really fat and juicy, compensating a little for the rhythm guitar tone, which is pretty subdued since they implement so many melodies.

On the downside, while it's by no means a deal breaker, it wouldn't kill The Temple to invest in a little more variation, even if that means bringing in other instruments for greater, somber depths. Acoustic pianos and strings would go brilliantly into and out of some of these progressions. I liked the album, but I did feel that many of the riffs were a little too similar, and a bit further guidance from legends like Sabbath or Candlemass in how to diversify the offerings would go a long way to creating a better rounded album. The level of evenness here does show that the Greeks can start off and finish a record fairly strong, and the album overall cultivates a moody, organic production which helps avoid the sterilization that often comes with over-wrought, over-polished Gothic doom metal which is too clean to crush your sunshine. Majestic doom, for sure, but just needs a few more shades of color to stand out even further from the legion lamentations already set to record.