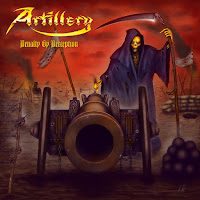 I was such a massive fan of Denmark's Artillery in their late 80s streak, leading up to the almost unparalleled By Inheritance, that it is impossible for me NOT to compare any of this 21st century reunion period to those first three seminal works. That's not to say I'm opposed to all the newer material; in fact I thought When Death Comes was an excellent comeback, despite the new vocals. But since that point, their material seems to have begun a downward spiral, which at best provides a tired doppelganger of the glory days, and at worst sounds like an entirely different band who just weren't on that same level as they once were. The last two records, while competent and well-produced, evoked a diminishing level of interest from me, and while Penalty by Perception doesn't exactly set a new low, I fear that it also doesn't offer much of a redeeming value if you're seeking either their technical power/thrash mastery, or their earlier, rough around the edges charm circa Terror Squad.

To be clear, Penalty by Perception is very much identifiable as an Artillery album. The brothers Stützer's distinct, uplifting riff style is present through the majority of the playtime. But since that has long been one of the two highlights of the band, it's also one of my disappointments. At its fastest and most frenetic, the guitar progressions here just feel like they're retreading By Inheritance or the prior post-reunion material, only with a lot less zest, and certainly less creativity. They can still sling an axe, of that there is no question, and yet the absolute over-the-top sense of melody and drive is lacking. The palm mutes are polished and chunky, especially in slower to mid-paced pieces like "Mercy of Ignorance", but the riffing level is at best a few steps below their prime, and lacks the raw and rugged appeal of a Fear of Tomorrow or Terror Squad. Tunes like "Rites of War" and "Live by the Scythe" sound like I've heard them before, only they've been paraphrased for less excitement, and at almost no point did a sequence of notes here stick out in my brain for more than a song's duration.

I'm also just not into Michael Bastholm Dahl's vocals in this band. He's a seasoned singer with a solid voice, largely mid-to-high range with a few flights north of that, but he just sounds too clean and tidy, even over these guitars here, which themselves lack some charm. What made the early albums work was their sense of aggression helmed by Fleming Ronsdorf's angry bark, and once By Inheritance arrived it was the contrast of frenetic melodic elegance with those same crude vocals. Here he just sounds like he could be singing over any other power/prog metal hybrid. That's not to say he entirely lacks an edge when he needs one, or that they don't complement him with some backing shouts and so forth to flesh out the variation ("Deity Machine"), but most of the time the performance just fell flat with me, too studied and restrained for the music to ever reach viral. Otherwise, the drums and bass are fine, the production is like a meatier modern take on the first couple albums, my disconnect really just comes down to the songwriting.

Penalty by Perception is still not a 'bad' album, per se, and they remain distinct among many of their younger, pizza thrashing peers, simply by virtue of them writing in this power/speed/thrash hybrid. I'd probably place this on the same level of its predecessor, Legions, a solid but unremarkable disc, one that I just didn't derive much enjoyment from due to the sterility compared to past brilliance.