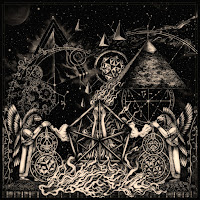 I believe one of the words I saw used to describe Finland's Khanus was 'shamanistic', and that is one I would certainly agree with after being hooked into its quirky, ritualistic spin on the death and black metal niches. The four tunes here, while not completely original, nonetheless create an organic, compelling atmosphere which hinges largely upon the earthy sway and dissonance of the rhythm guitars, but also on the frontman's unusual delivery, which is simply not commonplace among bands going for the deeper guttural cavern style, or the witching black rasp out in the winter woods. This is far more similar to Jiří Valter, 'Big Boss' of Czechs Root, especially when it hits that brooding, corpulent, lower end which feels like an incantation to summon up something very nasty indeed...

Or a swaggering, drunk cultist who just stumbled out of a drinking hole with his hood down, realizing that he's still got to pay the electric bill the next day. But, damn, when they were dancing around that bonfire, the guitars churning out that rich, antiquated evil in "Orgone", his barks and shouts grating beneath them, they were damned near to touching the infernal and singing their fingers off! Khanus is served entirely by how its riffing structures don't exactly queue up with any one sub-genre, but run the gamut of black, death, thrash, and perhaps even a little doom metal. Like Root, we can only shoehorn them into one category based upon the organizational preferences of our own minds, but they scratch a number of itches, with riffs that aren't extremely memorable in the long term, yet are captivating enough while one is in the midst of their roiling, jarring presence, especially when this singer is delivering those sustained, atmospheric, nihilistic growls. The drums here are groovy, shuffling and semi-tribal but also well fit to the band's tempo shifting; the bass lines wander just enough out of the subtext to matter, and really round out the ritual.

Additional flourishes like the haunting backing choirs are also mighty effective, and as I hinted before the riffs themselves offer enough variation that I felt they were constantly exploring and carving new angles to this sound, creating a richer perspective that instantly helps the band stand out among a wasteland of garden variety peers. You can tell that that raw, Finnish black metal lineage has rubbed off on Khanus, but they take it all to a new space, tracing their DNA not from Horna or Behexen or their own Norse precursors, but from a lot of less obvious bands that always thrived on the borders where various extremities met...Root, Acheron, Master's Hammer, groups such as these came to mind throughout Rites of Fire, but visually I kept conjuring up images of primitive pagans slinging fire and traipsing through a woodland wearing animal skulls. I suppose that means that this is a pretty goddamn good introduction, so I'll be definitely be anticipating a full-length, and hoping they ramp up the variation and oddness that they very clearly can.

Posted by autothrall at 6:09 AM