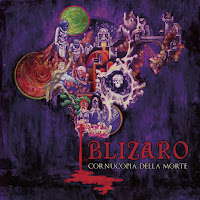 Cornucopia della morte is a record which has been waiting in the wings a few years, largely because of John Gallo's involvement in other projects like Elfspell and John Gallow. But we're all the richer for it finally seeing the light of day, because it's at the very least a bulking up of the quality Blizaro backlog, and ultimately yet another rewarding journey through a miasma of nostalgia which involves classic doom metal, progressive rock leanings, and even cinematic qualities reminiscent of acts like Goblin and Paul Chain. If your tastes collide with that bevy of genuinely creepy Italo horror films throughout the 60s-80s, or even towards an ultraviolet Black Sabbath filtered through a Hammer Horror lens, then I can't really think of another musical endeavor as worthy of your time as this one has turned out...

I should point out that I came away from Cornucopia with the notion that it's divided into two distinct semi-halves, the first comprised of the four parts of the "Nemesis" sequence, the other the five tracks which follow it. Certainly there is aesthetic feedback from one side to the other, but I almost felt as if it was an anthology of two EPs. That's not a big deal at all, and can probably just be attributed to the layout of the album, but it seems to transcend from a morose, gloomy doom metal atmosphere with some of Gallo's biggest pure 70s doom licks yet to something a little more free-form and jammy, as in the aptly titled "Giallo". There are still some heavy loads on the latter half, like "Frozen Awakening" which is about as pure as you're going to get, but just a slightly more whimsical willingness to tread off the beaten path, an idea which dominated a lot of their amazing Strange Doorways compilation which collected a whole of demo recordings into quite an experience. But I don't want to confuse the reader: the quality itself is pretty consistent throughout. If you're smoking what Blizaro is smoking as the curtains part for the mystical Egyptian intro to "Daughter of the Scarab", then you'll still be on board as that melodic jamming cards out closure to "Stygian Gate". If not, well...then it's going to be hard to roll when you're such a square.

Murky, leaden doom coming from the basement beneath your feet. It's no stranger to convention, but offers just enough structure and variation that it feels quite far away from the laziness of much of the stoner sect who barks up this very same tree, and really not terribly like anything else I own. Gallo is a riffing machine, incorporating loads of NWOBHM and even a handful of primal USPM traits into the hooks, and the thick, swarthy bass-lines and raw drums keep the head bobbing while the pupils dilate as you feel yourself launched into cult ritual happening somewhere south of Woodstock. And by south I meant under. the. fucking. ground. His vocals are like that haunted cousin of 70s Ozzy who is much less drunk off his own exhaust. Lead guitars will string you along, almost every song on the record continues to adapt and there's almost no way to accurately predict exactly what will happen, much like seeing an Italian horror flick for the first time. Sure, you know there's going to be some killer with a memorable quirk to his slashing behavior, but it's the color and the performances and the soundtrack which stands out to memory long after the plot secedes. Check, check, aaaand... checkmate.