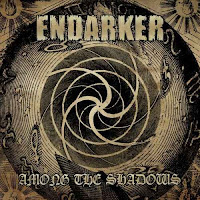 After the collected demos of Amenophis a short while back, I Hate Records has wrested yet another obscurity from the ether of the Swedish underground circa the 80s and 90s. This time an anthology of works by Endarker, a gnarly blackened thrash act which is likely best known as the haven of Magnus Devo Andersson, who most would best recognize as having played bass with Marduk on numerous occasions, including their recent, well-received opuses Serpent Sermon and Frontschwein. Among the Shadows is a mix of studio and rehearsal material, and as far as I know it's the complete work of the group all in one place, targeted primarily towards the collector and diehard of the particular scene, but not too shabby for the rest of us either...to a point.

The style here is certainly a prototype of barbaric, ugly thrash metal which derives its riff structures from both the 80s titans of the field, and a lot of dirty punk thriving in some of the chords. But it's the nihilistic vocal bark which will place it on the radar of fans who enjoy such timeless recordings as Mayhem's indomitable Deathcrush. Among the Shadows is not quite so memorable, filthy or vile as that beast, but the point stands that those who care not to have the conventions of primitive darkness are likely going to get a kick out of what Devo and his mates produced here. The riffs are not exactly inventive by any standards, and the tunes are pretty damn simple, often to their detriment, but the character of the howling, effected vocals more than compensates for its prehistoric construction. The studio tracks were recorded over 20 years ago, but mastered in 2013, so this definitely sounds a lot brighter and 'put together' than I might have expected, with great guitar grooves and climactic dynamics that spare much of the material from the critical fire, if not the underworld's own.

Once I got to the latter section of the compilation, a series of raw as fuck rehearsals from the years 1986-1992, I expected that I might be instantly turned off after the crude charms of the more pro sounding stuff, but I have to say that these aren't a bust either. It's almost like an uglier rendition of Hellhammer, or War and Pain-era Voivod, with a more steel-like thrashing edge, but plenty of gruesome vocals, in no small part due to the robotic or garbled effects used to twist them. I also dug that almost all the material is unique, with the exception of "Darkness"; it's all presented as it was and not in myriad version so the same songs repeatedly, which often pollutes a lot of these old demo and rehearsal collections. I won't promise you the world here, but fans of such pedestrian, ugly thrash when it was on the precipice of the new subgenres that would supplant it might get a kick out of this if they haven't heard it. Production guffaws between the recordings aside, this is a well suited score for splitting someone's head open with a rusted axe. It will sound as fun to you as it must have to Devo and company when they put it to reel.