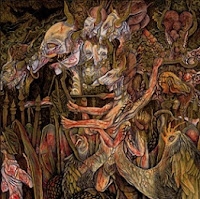 If Vigils of the 3rd Eye had zEleFthaNd's neighbors nervously contemplating a call to emergency services, then The Marrow Veil EP is downright certifiable, already long slipped past the veils of sanity to a place where I'm not too sure experimental death metal has ever ventured. Truly uncouth, alien and yet sophisticated in its madness, Howls of Ebbs looks to have torn the fabric of reality, and peeped its head into some place we were not meant to travel as a species, and I can only hope the fallout is confined to the greater Bay Area of California, and spares the rest of us. Hey, it's going to sink into the sea anyway...right? Haight-Atlantis? Mission District R'lyeh?

Describing this is a task, and yet it's basically, at its core, a continued unraveling or deconstruction of death metal tropes into a swatch of cinematic and atmospheric 'scenes', few of which are quite alike but all of which are scary as hell. Ambient discord, grating guttural narratives spun alongside spectral whispers through an atonal haunted asylum. And when the dissonant death metal progressions rumble out of their cells like inmates in chains, it sounds infinitely more effective than your latest cavern core 101 act trying to lovingly proxy its 1990s precursors. Percussion is cluttered but rich, adding a lot to the chaotic undercurrent of the compositions, and the core riffs are integrated with all manner of unusual, mid-ranged patterns which accent the roiling, ugly undertow of rhythm guitars that are delivered with the perfect level of organic, grimy grain. Definitely a significant horror influence to how sounds are structured, from the eerier graveyard mood to segments that feel like clouds of insects swarming their prey, burrowing into their blood and laying eggs in the viscera (in the bowels of "Iron Laurels, Woven in Rust".)

It might seem like a random comparison to some, but the longer track here ("Standing on Bedlam, Burning in Bliss"), clocking in at over 20 minutes, almost felt like a Mr. Bungle-level jaunt into sonic augmentation across a wide variety of moods, and yet its myriad contrasts all felt flush in its scene-setting. Creepy, but not without a degree of humor in its lack of constraint. It's the real front and center-piece of the EP and not just some bloated behemoth tucked into the folds. The other tunes are considerable shorter, but they actually do it justice, and thus The Marrow Veil is as consistent as it could be, considering its circumstances as bat-shit insane. I felt like I was captive audience to some short film by an unknown avant-savant, a Luis Buñuel of death metal who is really only at the beginning of his journey. Remember experiencing Un Chien Andalou for the first time, how you were revolted but couldn't turn away? Translate that into the aural realm, and experience a brilliant murk of obscurity that is more effective than the last thirteen fright flicks you saw.