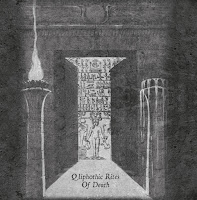 A defunct project by a pair of musicians who between them are responsible for probably half of Greece's underground black metal recordings, Seventh Xul's lone EP recording is getting a reissue through Iron Bonehead on 7". Featuring a new cover treatment that seems to convey its cryptic, nihilistic aesthetic mood rather well, but perhaps not the production level, which is quite good here. If you follow this scene, or these pages closely, then you might recognize Acherontas from his maintay of the same name, or other bands he's played with like Acrimonious, Nocternity and Stutthof. Necro/Necrotormentor you might recognize from Burial Hordes and Enshadowed. Together, with beats provided by Fotis Bernardo, another musician heavily involved in that scene with credits in Septic Flesh, Necromantia, etc, the duo concocts a formidable enough mesh of black and death metal to warrant a second look, even within its two-track lifespan.

"Sitra Ahra" immediately grabs the attention with its repeated, evil melodic phrase and the punchy precision and bulk of the rhythm guitar used to accent it like percussion. Once the song develops further, it's composed of largely predictable tremolo picked death metal patterns redolent of old Deicide, accented with bold octave chords ala Morbid Angel, but while they honor these old, overt Floridian influences, there is also a tiny hint of ritualistic Greek black metal that you'd associate more with Thou Art Lord or Rotting Christ, only a lot of the fetchier melodies have been supplanted by pure sepulchral aggression. Granted, this is more often captured in some of the break riffs, where the drums drop out, and the meat of the thing is far more conservative to its inspirations, but there are moments of departure, especially in the 2nd track, that bring this native spirit to the fore. Bernardo's blasting and double bass have a mechanical nature to them which seems better suited to a pure brutal death experience, not that it doesn't work within the context of this material, but it also doesn't leave much up to the imagination.

In all, while I didn't really enjoy the two tracks enough to spin them more than a handful of times, there were some decent ideas here which were clearly the foundation of great potential. As mentioned, the production is really good, better than what you'd find on a number of albums by its constituents. I do wish the drums were a little less clinical, and more atmospheric in volume, but he was more or less serving as a studio player and I'm not sure how much attention he was able to give the project. Also, the majority of the riffs are just not as compelling as the intro to the first tune, or the choppier atmospheric breaks nestled into the trenches of either of them, and one wishes they had fleshed that out more to make this stand out against a wider variety of old school death metal acts, because this is clearly more in that subgenre than the blackness, which manifests through only a handful of riffs and themes. Still, Seventh Xul was quite competent, and Qliphothic Rites of Death has its moments. With more space allotted for their ideas to gestate, they could very well have climbed 'the ranks' and become more radar-worthy across the underground.