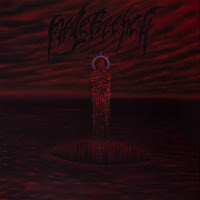 There's been quite the explosion of blackened thrash metal these past couple years, and while it's likely grown a little redundant and unnecessarily retrospect to some, I've been enjoying quite a lot of what I hear, provided that the bands focus on both the riffs and production aesthetics of their distant forebears, but tweaking the formulae just enough that I feel like it's an alternative take on a well trodden path. Maleficence happen to meet most of these prerequisites, taking a meatier, nastier approach to material that wouldn't have seemed so out of place on an early Destruction or Sodom recording, and then ensuring the riff selection is varied and consistently savage.

To be clear, once the swell of the dark ambient intro subsides, this is not a group that focuses in too heavily on atmospherics, instead opting for a more potent, clean studio mix in which the guitars are punchy and effective and vocals placed at a volume that emphasizes their ghastly, barking abandon. Riffing here is highly reminiscent of Mike Sifringer, only it's not as flecked with industrial steel as All Hell Breaks Loose or The Antichrist, but more of a polished Sentence of Death or Mad Butcher. The drums are forceful and enhance the charging momentum of "Pyre of Penitence", while the bass has just enough of a distorted coil and groove to it that you can really pick out where it deviates from the rhythm guitar line. They'll spurt out some picked tremolo riffing sequences to spin just enough of a Slayer-like proto-death metal undercurrent that complements straight up old 80s Teutonic thrashing, and throw up a few melodic bits you wouldn't otherwise expect (in the opening of the title cut), but there are other passages in which it's nearly indistinguishable from that classic thrash sphere.

Fortunately, the Belgians are not lazily spewing forth black/punk riffs that are all too predictable from the get-go, and there seems to have been a modicum of effort and enthusiasm here in the writing. The attention to the more accessible recording places this more firmly into the camp of bands like Erazor and Raise Hell than dingier, atmospheric groups like Power from Hell and Diavolos, but that's not a bad thing, as Maleficence just let the riffs do their talking for them, and that dialogue is established with a vivid and determined force. Not incredibly memorable to the point that you'll be hearing it in your head 25 years later, or perhaps even 24 hours later, but the tunes are entertaining enough throughout their existence, and a full-length of this quality, with the same commitment to varied, intense, impactful writing, would likely stir up some appreciation.