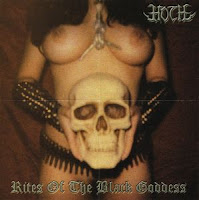 Had Rites of the Black Goddess arrived in full force a half-decade or so earlier than it did, it might have been automatically granted the status of a lesser known classic, and an example of black metal's parallel development in countries outside Scandinavia. The catch is: it DID, as a demo tape in 1995, but from what I gather this album was a new recording, and so I'm assuming had a better production. At any rate, Portugal's Hoth was and remains an example of how the crudest of paeans to this medium can exude a charm which can outweigh or offset it's lack of musical value; the sort of recording that is hit or miss when produced in more modern times but does generally tend to get a pass from the genre's audience due solely to its placement in history, and ability to evoke that unwashed 'innocence' of proto black metal.

Drudging and ritualistic, Hoth could hardly be dubbed riffing masters when most of the rhythms involve a scant few chords repeated ad nauseam to the point that any change whatsoever comes as a sigh of relief in cuts like "Impious Congregation" or "Hellish Revelation".  Any enjoyment here is derived solely from the raw, bludgeoning buzz off the guitars, and the thinly toned synthesizer lines, usually done in somnolent or organ-based pads, which accompany them. Fairly predictable in most songs, but there is nonetheless a timeless sort of charisma which dusts off the cobwebbed atavism at the core of your brain. Loose, wailing leads and bare bones beats round out the experience, as well as the growled vocal lines which certainly distinguished it from a lot of other black metal, which had been pioneered and evolved through the higher pitched snarling intonations. Hoth was also not above a few risks, like the acoustic/keyboard piece "Celebration of Isis", or the inverse ambient bookends.

Somewhere in here, I want to say there's a Hellhammer/Celtic Frost foundation to which the sole member JA's most dingy perception of horror/occult was to be applied. You can definitely hear this in the chord progression of "Pagan Melodies", as well as the overall murk of the production. Black Goddess is like some rare offshoot species of that style, which might have burgeoned forth into the musical gene-streams even if the northern, popular form of black metal had never taken off. Add to that the alluring cover art, and I'm really shocked this doesn't get picked up more, or discussed. That's not to say I have any ringing endorsement for the record. It's compelling as a window to obscurity, but not musically or atmospherically on the level of something I'd want to continually revisit. Still, if you find yourself wandering the grimy underground of antiquity, and don't mind the raw, simplistic, ambition-free riffing, dull if eerie keyboard lines and bare minimum DIY beats, Rites of the Black Goddess might induce a haze of corpse candles, dust and nostalgic rot into your lungs. And J.A. is still doing this, having put out a 'sequel' to the album just last year.