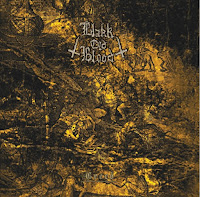 The 'fuck you' growled out so nonchalantly near the end of "Seed of Greed" seems a bit of conscious trolling here, almost like the gents behind Blakk Old Blood were aware they had just delivered one of the most uneven and inconsistent experiences you were going to hear all year and were proud of it. But don't let that opening volley deceive you into believing that I loathed this Swiss black metal throwback completely, for when they play up to their strengths, they do a pretty bang-up job of resurrecting a carefree, cryptic black punk attitude worthy of trashing one of Satan's hotel rooms. After all, the rates might be cheap, but you don't get to leave. I'd be angry too.

There are four tracks here, but unfortunately only two which are bearable. Opener "Misanthrope" is quite good, a burgeoning, bloody black/thrasher in the vein of old Bathory, Hellhammer, early Mayhem, Impaled Nazarene, and most notably Nifelheim. Driven, simplistic, hellish momentum established through a gruesome, more guttural vocal timbre and a set of riffs that are infernally catchy no matter how many times you feel you've heard them before. The third tune, "Thou Are the Dragon" is a bit more of a blast piece using tremolo picked riffs redolent of antique black/death metal, but I loved the trappings, such as the fat and voluminous bass of the into. Sadly, these two particular songs only comprise about four minutes of material, which in of itself is fine, and suits their impish nature, but for the fact that the EP is finished off with an eight minute, dragged out bore of a tune in "Seed of Greed".  This piece alternates between two very simple riffing structures, monotonous chords and an attempt at a creeper, circular guitar line which falls flat after about two minutes, and has no business going on for as long as it does.

There simply aren't enough ideas there, and to top that off, it's void of any drum beats save for some very tinny, distant cadence which I frankly think I might have been hallucinating. The whole idea was to create this blasphemous, hypnotic escapism but it's simply too dry. The other track here is just a growled vocal mantra with a couple of voices that doesn't exactly add much to the proceedings, and so I'm left with a feeling that what I just experienced had plenty of untapped possibilities. Had all the cuts been worthy of "Misanthrope", I would be singing it's praises to the golden dawn, but as it stands, it just feels like an entertaining teaser with a bunch of other, inferior material tacked on. At their peak, Blakk Old Blood certainly lives up to their name, and has reserves of potential best channeled into 2-3 minute blackened speed/punk, but don't get too comfortable with structural variation to the degree that it becomes detrimental to the experience.