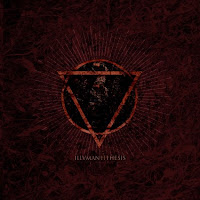 Illvmantithesis exists upon a jarring axis of dissonant and consonant riffing which ensures that many are likely to categorize it along other European specialists, namely Deathspell Omega and Blut Aus Nord. However, this Portuguese duo manifests a few splinters of distinction to their writing which ensures that they've got some room alongside those better-known acts and their peers. While I haven't heard their prior EP, and I'm not sure that I enjoyed these tracks quite enough to track it down, there is some mechanism at work within the underlying clockwork of their composition that felt fairly refreshing, not at all a chore to listen through.

Enlighten emit some dry black metal which shifts between sparser, atmospheric moments, fueled entirely by the guitars, and then the charging intensity that their chosen genre is best known for. But where they apply some melodies, there is just enough of an unexpected dissonance and flavor to the patterns that I wasn't exactly sure where they were all headed, nor was I disappointed with where they ended up. The bass lines are great, rampaging alongside the moderate blasting when necessary with a solid, distorted undertow, but also meting out some faint, lighter-than-air grooves which complement the rhythm guitar structures during less intense points in the songs. Drums are functional, raw and crashing, though I wouldn't call them a strength of the material, and the vocals shift between gruesome growls and snarls, with a little bit of maudlin Gothic mumbling at the close of the second tune "Shroud", which I also felt had the lion's share of the better guitar riffs. My favorite among these would be the almost vomited post-T.G. Warrior lines, so I do wish there were more of them, they simply sound more genuinely disgusting.

Rhythmically and structurally, a lot of the riffing doesn't distance itself much from other bands in the genre, but as I have hinted, there is simply a sincerity evoked through its slight degree of unique choices in what notes will construct a chord or sequence. The EP is given this bright sheen to it, balanced out by the ballast of the tortured vocals and sheer existence of aggressive tempos. Not sure that it has the capacity to overwhelm the senses like a number of the bands who really excel in this odd space between the orthodox and alien aspects of black metal, but it's at the very least a hint that there is some thinking going behind the songwriting, and that Enlighten is not entirely content with just setting up a comfort zone and staying inside its borders, even if the 11 minutes of material here are in truth pretty consistent in style and effect. Wasn't an entirely memorable experience, but it does make me remember the name as a band to watch in the future, since I'd like to hear how their more eclectic choices would span out over a full-length effort.