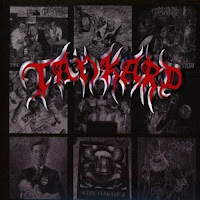 I have a lot of nostalgia for the 80s roster of Noise Records, one of the brightest and best ever assembled, by a staff that had a pretty good sense for tapping into legends-in-the-making. It's honestly frightening to think of what 10 to 20 bands were on that imprint at the same time, so when I see something like The Very Best of the Noise Years, that's going to pluck my heartstrings. I also happen to love Tankard, the earlier albums in particular, who were one of those many obsessions on that label that I've simply never grown out of, 30 years later. Zombie Attack, Chemical Invasion and The Morning After were quite the trifecta of records for a brash young idiot to whom beer, women and hyper thrashing were all novel or untapped subjects, and the Germans played with such intense abandon that I had no choice but to become infected.

So, if this Oldies & Goodies compilation had just been a 3-disc, remastered set of those efforts, then it might have been something I could invest in. Granted, I have no problems with the originals, and would likely always prefer them, but some people did complain about the audio (especially on the third album), and hearing that cleaned up wouldn't have been a complete crime. Instead, this is just the typical chronological perspective, with about 4-6 tunes culled from all of the first decade of seven LPs they produced through that label, and so you're not getting a lot of value, because you can simply go out, purchase those records in full (originals or represses), and ignore this shit. About the only real attraction might be having some of the Alien EP, but even that doesn't seem to be represented in full, and I seem to remember the tracks were available on a different CD pressing. Add to that the fact that records like The Tankard, which were the nadir for the band, are here instead of just offering more tracks from the others that were actually far better. In a nutshell, this is a typical label retrospective, possibly done with the permission of the band or to fill out a contract, but not really done for the fans.

Trust me: skip it. Go out and buy the first three albums. Hell, buy the three after that, and then any album you want from the 'latter half' of their career (R.I.B., A Girl Called Cerveza, and The Beauty and the Beer are certainly worth it). There is just not much to even talk about with this one, it's two discs of retread material in chronological order, and they couldn't even come up with a new fucking cover...it's just a collage of the originals. Hell, even if I wasn't fond of the re-recording comp they put out in (Best Case Scenario: 25 Years in Beers) at least that was some expenditure of effort, and worth buying a dozen times before this one. You have the internet, or actual money, you can can experience the full albums, you can pay for them, don't settle for this nickle & dime nonsense, not from one of the greatest bands that ever pissed in the Rhine. At least, I hope they pissed in the Rhine. I would be disappointed if they hadn't, so fuck it, I'll just imagine that they did regardless. Or maybe in the Danube instead, which I could accept as a substitute. Hmm. Someone confirm this for me, or I will never sleep again.