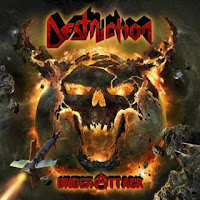 After 30 years and well over a dozen albums, Destruction is a band which, to me, tends to transcend all expectations. If they were never to make a record again which could match their flawless, fun post reunion effort The Antichrist, or even channel an effective nostalgia for their streak of innovative, 80s excellence, I doubt I would feel robbed. I think they've very likely shown us the full range of what they have to offer, without some drastic mutation like putting out a techno single; and if their own catalogue isn't enough, you can dip into the superb Headhunter discography, or the Panzer supergroup that Schmier recently took part of. Whether or not Destruction is going to write another classic is moot at this point, so the fact that they're still churning out some solid, energetic thrash is sort of...beyond what I might ask for, and while Under Attack does little to distance or deviate itself from this 'stay the course' mentality they've been locked into for 15 years, then that might just be enough. I said the same thing in 2012, for an album I found surprisingly catchy, but that one ultimately did have a mildly different feel to it.

Not so for Under Attack: this is pure, 21st millennium, muscular thrash metal which more or less comes across as an unerring sequence of remodeled, rearranged, riffs from their 80s era, only with the 'boon' of modern production which actually works against it, rendering it nigh indistinguishable from 4-5 of their other reunion era recordings. Voluminous, punchy rhythm guitars playing strings of notes and chords that don't possess a lot of nuance individually, but grant the listener enough variation that he or she isn't going to be too concerned as long as the neck can be strained, which with cuts like these is never really in question. The lead guitars here are actually pretty good, though, possessed of a style which seems to outlast their brevity, and most importantly, this just oozes Schmier's charismatic, strained snarls and roars to the extent that he might have recorded them all as prepwork for a "Nailed to the Cross" or "Thrash 'Til Death" and just saved them for now. He sounds like he's been taking some sort of miracle enhancement pill for his throat, and his bass lines are still fat and omnipresent even where they're not turning away from Mike's untiring, masterful ground work.

This is now Vaaver's third full-length within the ranks and he's hammering away with enough force that his presence instantly brings the Destruction beat system into line with other modern, extreme acts who might play faster and more technically, but not 'harder'. All of this adds up to what is just a consummately professional, pure, nasty Teutonic thrash blowout, at best semi-catchy in pieces like "Generation Nevermore" or "Pathogenic", at worst never really lagging behind much of the other material they've spewed out these last couple decades. The cleaner guitars add just a sliver of variety to the proceedings, tasteful and never overstaying their use, and whilst the bonus material, a cookie cutter cover of Venom's "Black Metal" and a re-recording of the original "Thrash Attack" from Infernal Overkill, are pretty safe choices, they don't allow the sum energy of the disco to falter. In the end, while this is unquestionably going to feel redundant to a lot of listeners, it's a well executed album which I'm going to get a handful of spins out of, but won't last me forever since there just aren't any tunes present that I could consider bonafide future classics for the Germans.