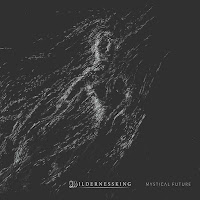 Before writing this, I actually searched back through my catalog of reviews to see if I had covered any South African bands before, and I'm not terribly surprised that this is indeed the first. In fact, this was one of the first bands I had even heard OF hailing from that neck of the woods, having generated a little buzz with their debut record a few years ago, and remaining fairly active since. And I must admit more than a little curiosity here, speaking as someone who is an enormous fan of cultural and geographical variation bleeding into the music I listen to, even if it's rooted firmly in the conventions of a niche I've heard many, many times before.

To that extent, I have to say that Mystical Future is slightly a disappointment, since it's more or less a drawn out, bare style of melodic black metal which concentrates on generally lengthy compositions and has that meandering aesthetic to it which isn't really news. There's certainly a spaciousness to the proceedings which my mind might attribute to a territorial stereotype, but had you told me this band was from the Cascadian scene or even Sweden I wouldn't have noticed much of a difference. Now, this all being said, that is perhaps the ONLY area in which I felt Wildernessking was indistinct, for in truth this is a pretty well done record, solitary and dreamy and seamlessly shifts from its wide open pastures of simplistic, harsher chords and vocals to cleaner, dry air guitar tones, best experienced in the middle piece "To Transcend" which is an exercise in lulling tranquility, despite the rasps that oft ring out against the background which only enhance its mood.

Such a tune is an exception, of course, because the majority of the material is either lurching or surging gloriously along at a determined clip, with dirty-bright guitar chords that easily place this in the wheelhouse of popular 'blackgaze' groups like Drudkh, Alcest, Austere or Wolves in the Throne Room, but in certain sequences are clinging directly to the conventions of old. They accent a lot of the mid-paced riffing with higher, melodic chords that blow the atmosphere wide open, and the vocalist has a nice, grueling, sustained black metal snarl that works really well, imbuing the lighter feel of the chords with something more torturous. The drums hammer along with a steady clap and crash, and the bass line keeps up with some occasional grooves that offer a leaden balance against the more windy maneuvers of the other instruments. Despite a few of the cuts being pretty long at 9ish and 13 minutes, I never felt like abandoning this journey throughout, and that's a testament to there being just enough happening here that it engages you. Simple, sure, and in places the chords are wrought in a predictable fashion, but it never really loses its sense of elegant savagery. I don't envision myself breaking this out much unless I'm in a very specific mood for this enveloping, patient burn, but it's certainly a well made, consistent sophomore from a promising act.