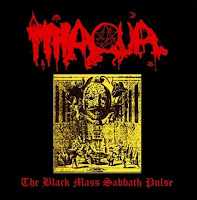 Longing for a throwback to that Golden Era of emergent Hellenic black metal, when bands like Rotting Christ and Thou Art Lord started to refine their sounds from their cruder origins into what has now become the defining, unique 90s aesthetic of that region? That is more or less exactly the wheelhouse in which Ithaqua operates, a two-piece band featuring members of Caedes Cruenta and Opus Magorum that seek to revisit and flesh out this sound without shaking the tree down that much. You might initially have thought this was a doom record for some reason, or possessed of the frigid countenance of the Mythos entity it is named for, but The Black Mass Sabbath Pulse is more or less Non Serviam, Thy Mighty Contract, Eosforos and Triarchy of the Lost Lovers incarnate, from the base construction of riffs to the pacing and plotting of the songs. No attempt whatsoever to muddle or disguise this influence.

And, for what it's worth, they make a fairly strong showing of the style, which has long been defined by its mid-paced, cavalry charge riffs with tinnier chugging patterns splayed out into more uplifting melodies than the dissonant and dextrous Scandinavian strain that took off with Immortal and Emperor. In other passages, primarily in the second track here ("Walpurgis, the Flight of Spectral Witches"), the guitars feel like pure driving heavy metal highlighted by the arcane but cheesy synth lines, bluesy leads and then little popping, perky melodies highly redolent of Triarchy of the Lost Lovers, albeit with the production of the two previous Rotting Christ records, even some cutoff points where the guitars take over before the charge begins anew. Bass lines are pretty pedestrian, in that they don't often disengage from the root notes to explore the atmosphere of broaden out the songs as a whole, but at least you can hear them audibly plugging away, and the drums play with the similar shuffling rock beats to their influences, rather than trying to extremify it all with endless walls of double bass and blasting.

Vocals have a murky snarl to them, which is surely reminiscent of Tolis, if not exactly the same, but they don't ever shine quite so much as the guitars, which are going to be the make or break aspect of this 7" for almost anyone interested in hearing it. The tunes run a little on the long side, 16 minutes for just the pair of them, and they might have proven more effective with a bit of editing down; but at the same time, it's not like they just stuffed them with boring content. Personally, while I appreciated Ithaqua's attention to detail in both composing the songs and mirroring that early to mid-90s style of production, I just don't know that they're quite as majestic as the material they pay homage to, and so I'm more likely to run into August Derleth's Great Old One in a tabletop session of Arkham Horror or Eldritch Horror than I am to bring this one back out, when instead I could just pop on some vintage Rotting Christ and still get more from that. But don't view that as a rousing rebuttal on my part. N.C.M. and Echetleos certainly know their business here, and get about it quickly for anyone who direly misses the sound and wants it trapped on vinyl yet again.