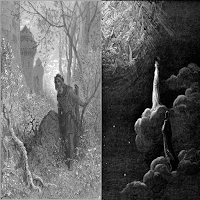 Blacksoul Seraphim's material provides a callback to a niche of Gothic doom metal which is not only increasingly obscure in general, but even more rare from the New England region. The duo of Joshua Carrig and Rick Lowell has been chipping away at this stone effigy for the past four years, already producing two quality full-length efforts, and The Persecution Hymns seems to continue that streak with minor progressions which capitulate to their prior aesthetics, yet round out the sound to an even more professional and mature level. Though this EP is a mere two songs clocking in at under 20 minutes, there is quite a variety of content within, and each of the tracks creates a narrative contrast which flows with that of the titular characters it portrays.

"Sunsworn Knight" is the opener, a somber and emotional piece of beautiful doom which shifts through a palette of tempos, rather than settle on nearly nine minutes of repetition and redundancy. Brighter chords selections, and the restrained use of pianos accent Carrig's vocal performance, which hits a nice angry stride at the climax of the verses, a potent spin on the stylings of Yearning's late Juhani Palomäki or Moonspell's Fernando Ribeiro. Female vocals are incorporated tastefully behind the lead vocal line, while there is a major improvement with the bass-lines, which offer something slightly different in the choice of grooves and fills that strengthen the composition. Lowell's own beats and fills are confident and consistent, a drummer who is just as comfortable blasting along as he would be grooving, never content to just play metronome, so there is always this sense that the song is about to go nova, and while that never completely manifests, there are definitely segments where some of that energy transforms into a payoff.

On the other hand, "Pureblood Demon" is a more contemplative lamentation, with a guest narrator giving the listener some background through an elegy worthy of Bal-Sagoth only a little more serious in tone. Then the deep intonations of Carrig's clean take over, eventually leading up to some of Lowell's crumbling gutturals which strike at just the right time, ascending back into a glorious apogee where the male/female duet returns like a lullaby set to cathedral doom and a faint trace of organ. Blacksoul is simply not the predictable, garden variety of Gothic doom which rests on its laurels for endless cycles of nothingness, but a vibrant and tragic take on its constituent genres. In fact, there are numerous flourishes of progressive, black and melodic death metal here, so I hesitate to even narrow it down. This pair doesn't care to restrict themselves to any one in particular, so why should the rest of us?

Granted, this is not an admixture of genres for everyone in 2016. It's not for pizza thrashers or closet Vikings who came into metal through rhythm-based video gaming. It's pretty Euro, and I think that's where you'd find the lion's share of its potential audience. But if you do find yourself reminiscing for those late 90s or early '00s recordings which populated the rosters of labels like Napalm and Holy Records, or if you enjoy Isole, mid-era Anathema or the less crushing My Dying Bride material, then this could certainly prove worth your time. It doesn't just completely settle for the dusts of nostalgia, but offers a slim ray of hope that such styles can continue to be etched away at, continue to evolve towards the future. That's not to say it's blindingly original or ambitious, but it's also very, very far from lazy. It's flexible. Fecund with possibility. The value of just these two songs rivals that which I derived from the entire debut album Alms & Avarice, which was no slouch. A great access point, and an even better launchpad for future efforts.