The Wakedead Gathering - Fuscus: Strings of the Black Lyre (2016) 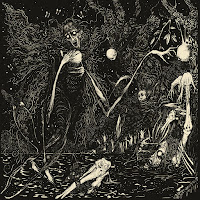 I did not entirely warm up to Fuscus: Strings of the Black Lyre at first, finding some of the songs like "Blood from the Earth" and "Amnioticysts" more immediately rewarding than their neighbors. But after several repeated listens, the chinks in its exoskeletal armor have begun to seal, and I'm left once again satisfied by an album which once again reaffirms that, like any other metal niche, the true appeal of death metal is in its aesthetic overtures just as much as the individual riff-craft used to compose its components. On a note for note basis, Lampe doesn't always concoct the most explosive or unique riffing passages to explore, but it's how he fashions them all together just so slightly left of center to what I normally find in my listening queue that I get all my enjoyment. So whilst I can't say this quite hit the strides he set with its predecessor The Gate and the Key, or his great Dark Circles EP, Fuscus is still something I would heartily recommend to anyone seeking sincerity in a field that has been unfortunately trampled by well-meaning devotees, whose idea of keeping the flame lit is by simply taking and handing off the torch.

The Wakedead Gathering is instead mining the murk and gloom of its genres' creation to generate an alternate heat source, and the result is something easily identifiable, but the stuff of moldering corpses drenched in the oily damp of dense bog waters, like a death metal peat mummy which is ever so slowly rising to the surface. Suffocating, faster guitars grinding on the opacity and bloat of their death metal forebears from the early 90s, interspersed with dissonant, atmospheric passages, and subtle, super simple bass curves while Lampe introduces blends of rasps, gutturals and even some more ritualistic spoken whispers to create perhaps his most overtly 'horrific' experience to date. The standard Death and Incantation rhythm guitars cycles here are balanced against melodic textures which often espouse the melancholy of ancient Paradise Lost ("Lungwort"), and there are also spikes of antiquated, tasteful Scandinavian melodies ("The Harrowed Column") which come unexpectedly but not unwelcomed. To boot, Fuscus contains what is easily the best pure death/doom hybrid he's written yet, "An Ancient Tradition", with harmonies so funereal that I almost called up the florist, until I remembered that this was just an album I was listening to.

Right around par with much of his previously released material, this Fuscus is further evidence that The Wakedead Gathering remains one of our underappreciated, humble USDM treasures. Though the variation from record to record might not offer as much stylistic breadth and deviation as a band like Horrendous, the quality is entirely consistent, and the project's vision remains distinct beyond a lot of bands just trying to recycle Onward to Golgotha, Left Hand Path or Dawn of Possession. You might not recognize this upon first exposure, since the basis of a lot of riffs will feel familiar, but its how the songs are laid out, and the left turns they often take which weren't immediately telecast by the structure of the chords before them. The lyrics are evocative, mystical, horrific. Get this. Get everything Lampe has released under this name. He may not have published his peak, or his 'masterpiece' yet, but this is one of those cases where you're very sure it could happen at any moment, and even if such a thing were to never manifest, the journey was worth taking all along regardless.