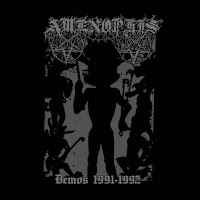 I'm occasionally chided over the dim view I take on some of the high profile, soulless contract-padder compilation albums released through labels with a budget, which do little more than republish material which is better experienced in the context of its original album. But in reality, I have no such animosity towards the format when it is used for appropriate purposes, which are not to loot the pockets of a band's loyal listeners by selling them back the fat off their own asses, but to provide an opportunity to acquire material that is collected from obscure sources. I Hate records have done exactly this with the Demos 1991-1992 comp covering the only two recordings by an obscure Swedish death metal band, Amenophis.

Now, this might seem like a trending, redundant process, since by now that country's scene has been nigh exhausted, bands worthy of being heard, and others not so much, but the fact remains that this was not something you were able to pick up without some tape trading 25 years ago, or perhaps by fishing around on the internet. That the CD features the entire body of the band's recorded output is a boon, too often will something like this come along and be lacking a couple songs or demos due to either neglect or 'natural' circumstances where the tapes are all missing, destroyed, etc. So I rather do like the humble setup here, with eight tracks laid out chronologically in the order they would have been originally experienced by someone local that picked them up. As for the music itself, it's fairly average in structure and quality, sonically attuned to what Entombed and Dismember, structurally more along the lines of Grave and Seance; a clear antique Floridian death aesthetic beefed up by the fat, ripping rhythm guitar tone that would forever etch that Scandinavian style onto our radars.

A few drawbacks to the mix, in particular on the first, eponymous demo, where the guitars are much more prominent over the tinnier, distanced drums and the gruesome bark. After hearing so much of this stuff, not only in the early 90s, but for decades of waves of retro-bands later, it's hard to say that any of the riffing patterns truly impressed me, but it's genuine enough and passable for its day, and with a little more prompting and sculpting, Amenophis could have easily been snatched up for a full-length alongside other lower tier bands like Sorcery, Epitaph, etc. The instrumental acoustic interlude is quite nice, and then the harsher material of the second demo The Twelfth Hour (1992) at once seems more dynamic, almost as if they'd gone into a death/thrash mode with riffing more akin to Slayer and less of an obvious Swedish tone...in fact this is more in line with bands like Master or Messiah. The vocals more raw and abusive, a lot more melody inherent to the guitar. The bass stands out better. The drums also have a stronger presence, and though the riffs are often as predictable as the earlier content, they definitely felt better developed, in particular the lead sequences in cuts like "Eyes of Fire".

At that rate of progression, who knows if a possible third demo the following year would have stirred a lot more heads or provided something really inspired or unique? We might never know that, but at the very least we can discern a projection towards that goal and a ramping up of the maturity in the songwriting, even with such a small sampling size. And that's really one of the thrills of listening to such 'doomed' bands decades beyond the point, hashing out all those little details. Amenophis were not performing on the level of the Swedish front runners at the time, and I don't think that's a surprise to anyone, including the band, but had different opportunities or vacancies opened up, it's not a stretch to imagine that this band might have risen through the ranks and potentially written us a cult classic that we celebrate to this day. It didn't turn out that way, but purists for the Swedish death metal sound who drool over everything to do with it would proudly count this among their collections, and that's really the point of the thing. Because now they can.