The Wakedead Gathering - Tenements of Ephemera (2010) 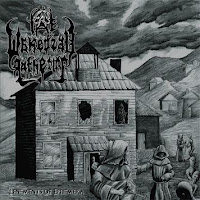 Tenements of Ephemera was a small run release making its way to only a limited audience, so one might have been forgiven in to have missed out on it amidst the slew of old school death metal being revitalized and released this decade. That said, Andrew Lampe's material showed promise even as early on as this full-length, which resurrected the origins of the form and then immediately put his own, distinct stamp upon it; not by completely rewriting the math, but by tampering the equation to incorporate the small atmospheric touches his material has been associated with ever since on the great Dark Circles EP and subsequent albums. Whereas the same riffs here might feel less imaginative or evocative in the hands of some trendster cycling though the dustbins of the genre for inspiration, they bloom across Tenements of Ephemera like the creeping fear one might experience when reading a really great proxy for a classic horror author.

Genuine death metal, setup with a dark ambient/synthesizer and then punching through into fleshy walls of roiling, Incantation-like tremolo patterns with Lampe's ominous guttural, but before long... you're treated to your first taste of what makes this 'different', a series of varied, lurching, segments which imply both dissonant and eerie melodies to the cemetery soil beneath. Vocals are often layered between several growls to create a grotesque chorus. Individual tracks exhibit plenty of internal variation and never wear out their welcome with swollen durations replete with exhausting repetition. The Wakedead Gathering doesn't exactly tread on 'experimental', but Lampe is fully willing to flip his own script, as in "The Black Foundry", "Permutation" and other points where the progressions take on a very doom death blend, whether imbuing that into a faster paced series of riffs or cut off into an instrumental all its own like the guitar-warped "In the Offing". The beats are laid out with a lot of double bass patterns and tinny cymbal sounds, and would probably prove the least compelling element of the composition apart from the fact that they just fit the riffs perfectly.

To be clear, Tenements of Ephemera is not going to blow your roof off, or your speakers out, but it's a more subliminal, reined-in brand of pure death metal which uses its lack of complexity to create a morbid, intimate atmosphere with an almost claustrophobic cinema feel. And I admire the approach, not so much a deconstruction of the genre's foundations but a slightly alien vibe to it that is purely the purview of its author and not some prevailing trend everyone is doing, even if Wakedead can easily cross over to fans of all the Asphyx, Death and Incantation throwbacks we've been inundated with for years (and some to our great benefit, to be sure). As someone who used to originally imagine that this style of music had been envisioned by the minds of aberrations, who in turn transmitted it through the limited lens of squishy human brains, it feels otherworldly even though it's half-rooted firmly in death metal conventions. Dark Circles and The Gate and the Key were both improvements in that the songwriting became more distinct, the atmospheric licks more memorable, but this was already a great project going forward, and the gap in quality is minimal.