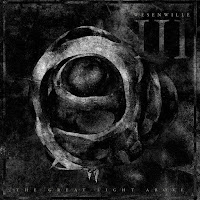 After a quality sophomore effort last year and a reissue of their debut with some additional live material, the Dutch act Wesenwille is already firing up a third onslaught with some of their most savage material up front. The Great Light Above is another album one might fit snugly into the 'urban black metal' mold, its vibes do not holler at you from the side of a snowy mountain slope or a canopy of pines, but from the shadows of depressive cityscapes, shadowy back-streets throughout the history of strife-fraught human civilization. Musically it's just as gray as its two predecessors, and that can certainly limit the experience if you're seeking something more colorful and melodic, not that this album is void of such techniques, only that they are delivered in such a starkly desperate, dissonant armor which a nearly industrial certainty (though the music itself could not be dubbed industrial).

Atmospheric trapping abound like organs that help round the record out and give it a fuller body, but for the most part this is just savage, straightforward traditional blasting black metal which uses a lot of nuanced guitar techniques to dress up its tremolo-picked progressions that they feel bolder and richer than you're going to find off your garden-variety worship of Mayhem or Dark Funeral. There is always some direction this band is thrusting in, and when they break it up to slower, churning rhythms as in the track "Transformation", they become even more interesting and frankly, rather original. Would these components stand out as much if not placed against the scathing, bleak black metal battery? Probably not, and that's why this is yet another record which confidently gets its hooks under your skin and continues to pull until your outer layers are stripped, because it's just got the right balance between full force momentum and sparser, almost ambient segues which permit pensive escape.

If it suffers from anything, it might be a little of the redundantly dissonant black metal that we've heard so often these last 10-15 years from the wave of bands that follow the modern French masters, I mean you can tell their albums are going to go that way just by looking at the black/white artwork. It's a bit samey with their earlier efforts, sure, but looking at The Great Light Above from any sort of objective angle, it's sharp, raspy, cleanly produced, well-rendered and never lacking for effort, further cementing Wesenwille as one of the best up-and-coming genre acts on the Dutch scene, with ease.

Posted by autothrall at 9:44 AM