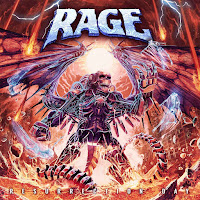 Resurrection Day proves that you don't have to get softer as you get older, because part of the appeal to this album is its reliance on the punchier, low end riffs which have a slightly more meat-headed and thrashing force to them than you might expect. Not that Rage hasn't flirted with this level of aggression many times in the past, and in fact you could argue they've got a lot more intense songs in their backlog, but this one doesn't waste any time in using that to get your attention, which it does...the problem would then be in KEEPING that, which was not always successful on this...twenty-fucking-forth full-length album, if I'm counting correctly? This is not a band with anything left to prove on this Earth, that has given me more great music than I could ever know what to do with, and maybe this isn't their magnum opus, but having said that, it's still well-rounded, professional and hits more often than it misses, and those of you tuned into the modern Rage catalogue will have little cause for complaint.

We're still pretty far removed from the shrieking, innovative speed metal of the band's 80s period, but Resurrection Day incorporates pretty much all of the band's tropes past that date. Arrangements that involve a lot of 'Lingua Mortis' orchestrated intros or backgrounds; the burly, unique, mid-range Peavy Wagner vocals that he's settled so comfortably into since the mid-90s; clean and potent production; and a crack team of musicians that make it all sound so simple. There are a few misfires here like the 'death grunts' which are obviously not confident enough to appear for more than a few intonations, and I do understand that this is all an attempt to feel cool or relevant, but while they don't muck up the works here they really aren't necessary. Jean and Stefan's guitars are mighty whether they're chugging along, or breaking into the sticky, dramatic leads, or even lots of little unexpected chords and/or riffs that they throw in here to counterbalance everything else. The rhythm section is fully on point and everything on the album is clear and distinct, in terms of polish this one is unquestionably one of the most up-front of their works, you won't be straining your ears for anything.

I think what this one comes down to is that it's another of their albums when, 'in the moment' I am almost constantly impressed and engaged, but once I've shut it off for the day I never think about it. Tracks like "The Age of Reason" or "Arrogance and Ignorance" prove that this band has every right in the stakes to be as blown up and popular as a Blind Guardian or Sabaton, other than the aforementioned 'extreme' vocals, but like a lot of the modern output from both those groups, it's just not sticking with me for an amount of time longer than it takes for me to get my fix, and then I find myself wanting that fix from earlier Rage records. Don't get me wrong, this one is a whole step above 2020's Wings of Rage, which to one of my least favorites in their catalogue (if still not 'bad)', and it's about on par with Seasons of the Black, but when I'm interested in listening to their post-1990 material, my modern Rage medicine is still going to be Unity, Soundchaser, or Carved in Stone, which most of the ensuing 21st century albums have more or less been trying to reiterate.