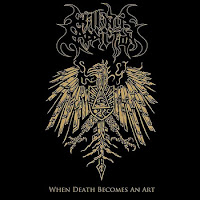 Killing Addiction might never have the hitting or staying power of so many of their better-known Floridian death metal peers, but the band has managed to survive the years with smaller transfusions of creativity that result in the long 28-year stretch of EPs between two proper full-length recordings. When Death Becomes an Art didn't arrive after a decade plus hiatus as its predecessor, Fall of the Archetypes, but at the same time it doesn't seem like much to advance the band, just a two-track offering of meat & potatoes death metal which channels the style they've always been more or less known for, with splashes of a Malevolent Creation or Morbid Angel, but not really the material to stand out. This was a self release at the time, digitally and with some limited CDs, so one would not maintain high expectations, but on the surface level there's nothing really wrong with this either...

It's straight up, rumbling death metal, perhaps a little more involved than an Obituary or Six Feet Under but not as wild or proficient as Corpsegrinder-era Cannibal Corpse and Morbid Angel. The band doesn't rely on any bedrock of cheap grooves, they actually incorporate a little grindier UK-sounding death that reminds me of an earlier Benediction or Napalm Death, and then a little bit of clinical precision along the level of the later Barnes years of Corpse. Deep, steady but average gutturals are accented by some snarls, and the whole mix keeps a very low-end sensibility, the band doesn't really go off to explore those frets until the lead sequences, which in "Promethean" are at least passable and offer another dimension to the ear clubbing sounds they offer. The band manages to sound exciting without actually playing riffs that bore into my memory, especially on that second track, so I'd have to say while this 8 minutes of content is nothing overly special, it at least gave me some hope that Killing Addiction might have a stronger future ahead of them than their past, which had peaked with 1993's JL America release of Omega Factor (which you're more likely to track down on it XTreem Music re-issue).