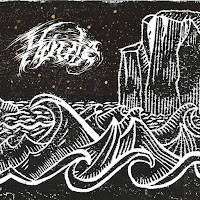 Up front, I really like the approach to nautical black metal taken by this new French act. I believe 'Houle' translates to 'Swell', as the waves, and the primitive artwork with white waves and cliffs imposed upon the black background reminds me of a negative taken of some old art or etchings found in some old marine texts or books. The ocean, with its ebb and flow, its calms and unrelenting tides in juxtaposition, is easily one of the best inspirations you could have for the medium of black metal, and this EP attempts to capture that to a tee. The band also has a cool look resembling lighthouse workers or potential escapees from a prison barge. To this conceptual degree, I would say it is a success, since the melodies chosen and the overall attack of the band does sound like some sort of desperation at sea, the roiling guitar rhythms play out like a long stretch of choppy waters for as far as your eyes can gaze.

But it's quite straightforward, melodic black metal, with a little bit of sadness in there, and a nice mix of strangulated rasp vocals with some cleaner chants that have a lot of potential, often infused with a bit of a spoken word vibe. The guitars are constantly ushering in cycles of melody to offset the raging lower chords, and the production throughout is really great, with thundering drum-work and the vocals hovering at a volume just a fraction higher than the instruments to emphasize their emotion, which can often peak in some Burzum-like scream. Like a lot of newer black metal acts lately, Houle definitely dwells within that traditional 90s framework, only they don't use synths to create a vibe like vintage Dimmu or Emperor, instead relying almost completely on the guitars themselves. So to that effect they remind me a little more of Swedes like Dissection or Dawn, albeit with the neat nautical sound effects thrown in there to give this recording a clear place in the world.