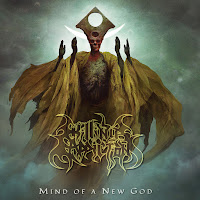 The Shores of Oblivion EP and Killing Addiction's signing to XTreem Records seemed to be an incredibly positive direction for the unsung Florida death metal troupe, but unfortunately the band wasn't able to immediately capitalize on that with an album the following year. Fast forward half a decade, and it appears we had finally gotten that album with Mind of a New God, which if nothing else delivers on some of that potential, and firmly establishes that this new phase in their career is by far their best in terms of compositional strength. I mean even the worst track you'll find among these is superior to Omega Factor and all the material on their early EPs, and it's another effort like Shores of Oblivion which is just a pleasure to sit straight through without skipping any of the tracks...this is consistent, bludgeoning, death metal that understands how to sound like a threat and not just going through 'the motions', even when it is.

The style is largely built upon the back of that aforementioned EP, only the palette is more adventurous by far, with a slightly less trudging early UK vibe, and even more emphasis placed on the middle and upper registers of the guitars through clinical harmonies and leads. The production is a bit crisper although you'll get plenty of that lower ballast through the steady gutturals, however this also plays to the strength of the guitars which are for me the highlight of the album. Style-wise it sounds like a mash-up of elements from Brutality, Monstrosity, Benediction, Morbid Angel, Malevolent Creation and even a bit of Pestilence in some of the more dissonant, interesting guitar parts, but I'm not citing that as some sort of limiting bracket of parameters, because there's a lot to work with in there, and Killing Addiction does. If you're thinking you'll miss out on some of the lower, knuckle-dragging death metal grooves, they've also got plenty of those in tunes like the end of the title track to sate your pit-punching needs. But really despite the commonalities of tone and structure between the tunes, they're all set up with a balance that continues to offer you a riff or two to take you off guard, which is the hallmark of good songwriting.

You've heard Mind of New God before through the band's backlog or its influences and peers, but that doesn't make this any less fun to listen through if you just want a dependable, entertaining death metal record that embraces the strengths of its genre. There is still plenty of good stuff coming out of those early Florida staples...for example the latest Cannibal Corpse and Cynic records are pretty good, and I even thought the latest from Deicide was a nice surprise, but the road to victory for Killing Addiction is much more redemptive since they've finally earned a spot at the table with an EP and album that should thrill a good cross-section of the death metal audience, between the more classic, atmospheric fans and those who were slightly more tech-savvy or into the brutal pioneers of the 90s out of New York or the Netherlands.