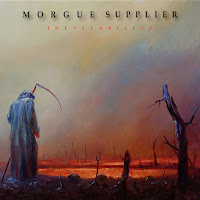 'If it ain't broke, don't fix it' is the popular expression, and had these Chicago deathgrind lunatics followed up their eponymous, excellent 2016 album with more of the same, I wouldn't have complained much. But Morgue Supplier LIKES to break it. They LIKE to shatter their style up against a concrete surface and then reorder the pieces, and thus Inevitability very quickly becomes their most fragmented, unhinged and challenging record to date, but one that doesn't leave its predecessors far behind in terms of stylistic foundation. If I described this to you as a hypothetical project in which members of Voivod and Godflesh teamed up to create a harrowing, grinding rival to Napalm Death, would you believe me? Because more than once in listening through this 38 minute frenzy of blasting and jerking, dissonant rhythms did such a comparison wrench itself into my brain.

Be ready. When you first spin this album you'll be presented with an immediate flurry of distorted bass and crazy tech grinding, almost enough to knock the wind out of you. I readily admit that when this band is going off the rails at full speed, it can become exhausting, but the real treat here is what lies in all the spaces between such spasms, where the material becomes more spacious, brooding and experimental, almost like the dissonant industrial apocalyptic landscapes that might surround the borders of what we see upon the late Marius Lewandowski's cover art. Loping, drudging Streetcleaner-grooves that split up the head-spinning violence, or airier guitar sections where the more open notes are allowed to ring out (as in the bridge of "Closing In") before they return to the tumultuous aggression. The drum programming is incredibly intense here, with all sorts of broken fills and patterns that feel like a claustrophobic puzzle you're trying to figure out, with each new track providing another painful peace. There are also these wild leads that erupt to keep you even further off-balance, and Stephen Reichelt's aforementioned buzzing bass-lines keep pace with the rest of the massacre.

The vocals of longstanding front man Paul Gillis are as sick as usual, trading primarily between a deep and resonant guttural and the impish snarling and rasping you might also recognize from his other projects Drug Honkey and Rabid Beast. It's a wild and hideous contrast that works very well against the razor-edged but scattered precision of the instrumentation, and you won't even get a chance to become bored of it as you'll constantly be questioning just what is this guy on!? Then, right near the center of the record you get hit with this instrumental, swelling, droning interlude which is just the perfect place to give your ears a rest while still feeling threatened. Some of Inevitability's best material actually comes through in the second half, "Existence Collapsed" with its wild riffing patterns, or the super clamorous and industrialized hell-scape that is "Thoughts of Only Darkness" which really hits that Godflesh/Treponem Pal feel but laced with the Voivod space-weirdness. The production is clear enough to convey the manic message of the death and grind aesthetics, but still malleable and raw.

Are there any chinks in the armor? Cracks in this already cracked mirror of an album? Not many. A few of the song structures feel a little overly random, spitting out idea after idea but sometimes forgetting to capitalize more on some of the better ones. And I think the more rapid-fire, spastic moments on the 2016 album hung around with me a bit longer, but Inevitability is a little more experimental, more deeply exploring other influences that weren't always as prominent before. Morgue Supplier is one of the better, more important grind or grind-adjacent bands out there because they don't rest on the dull laurels of the form...this isn't your garden variety collection of sped up four-chord hardcore rhythms, or a sample saturated gore-fetish platter; it's compulsive and cerebral and reminds us that this music can have a brain, even while it's hammering nails through yours. Put this alongside Poland's Antigama or some of the cooler, recent Napalm Death records as evidence that there's so much more to explore.