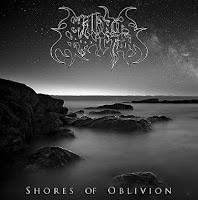 The first time I heard the Shores of Oblivion EP I almost did a double take. I'd had few expectations based on the previous output, and yet was pleasantly surprised by how much tighter this material was than anything they had put out to date (including Omega Factor). The songwriting is catchier, the leads are good, the little details they put into the tracks are appreciated, and it barrels forward with a confidence not unlike its primary influences, which I've hinted at before carry some similarities not only to their Florida fellows, of which Brutality is certainly an apt comparison, but British mainstays like Bolt Thrower or Benediction, super evident in the first cut "Engine of Ruin" which is pretty much pure tank tread death metal, 'slow grind' with the great gutturals that crumble with a cool decay every time they are sustained for even a few seconds.

Take that bottom end and then glaze it with nice, creepy atmospheric guitar leads and you'd have what would be the best song in Killing Addiction's library, only the others here are just as good, like "Cult of Decay" with more good leads and a nice, loping groove that emerges deeper into the bridge, or "Into Shadow" which sets itself up with some nice, creepy cleaner guitars that ascend into electric melodies and some really nice, old school riffing circa 80s Death. Everything about this is just a step up, from the guitar work to the production, the rock steady drumming and most importantly, the ominous, dark but clean feel to the way the instruments are all mixed...certainly a bit more polished than the EP that had come two years before it that wasn't half this memorable. Shores of Oblivion is no reinvention of the wheel, and you could argue it's just quality, generic death metal, but it's also proof positive that persistence can really pay off, for however easy it might be write off some of their earlier material, this one is just 15 minutes of what you like in this genre...evil grooves, dark leads, well worthy of repeated listening.