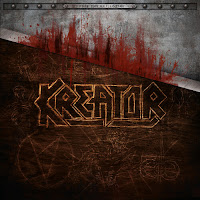 Not to be confused with the Under the Guillotine vinyl box-set, which allowed rabid thrashers everywhere to get these oldies on their hallowed plastic format of choice, this is instead a new 2CD compilation put out through the Germans' alma mater Noise Records, and is largely comprised of remixes, rarities, and some reprinted tunes from stuff you might not be able to find like the Out of the Dark EP...initially I viewed this as kind of a grift, preying on the usual nostalgia, but it seems that at least some effort was placed into getting a bunch of odds and ends in one place for fans who might not have even been around to get them in the first place. That's not to say there is much value for me personally in this collection, it's mostly useless, but I've certainly come across far worse efforts.

Having said that, there comes with this a bit of inconsistency in terms of pure content, because you'll be getting rare versions of particular tunes, or remixes of others, but not for the entire albums, so it still comes across like a grab bag. For pure listening, it's not unlike pressing 'shuffle' on the Kreator discography you might have uploaded to your iPhone. Although tracks like "Terror Zone" and "Terrible Certainty" are remixed, the production alone doesn't help them meld in quite so fluidly with "Flag of Hate" or "Extreme Aggression", and the end result is that it wouldn't be so different than just a pure compilation of stuff jerked off various recordings, since that's what is basically is, only a mix of the original records and then the remasters this company did once they became active again. On the second disc you get more live cuts, and some of these like "When the Sun Burns Red" or "Riot of Violence" sound pretty awesome. There's an early demo version of "Bonebreaker" which sounds a bit shit, but at the same it totally captures the violence of the band's style that they'd later impress upon the superior sounding Endless Hate.

If you're new to Kreator and can find this around in a bargain bin for a couple bucks, it's probably worth the effort because let's face it, all the songs here are pretty awesome, yes even the stuff from the sadly underrated Renewal. But for full price, avoid it and just start picking up the first 5-6 full length albums, or even most of their newer records, because this is a band that has been tremendous for much of its career (Cause for Conflict and Endorama aside). If you're a hardcore follower, then you likely have all of this material and probably even the re-releases with the remasters, so this then downgrades to utter dogshit, make your own compilation and enjoy. But if nothing else, Under the Guillotine tries to provide a cross-section of quality material showing the band's strength through all its time on the label.