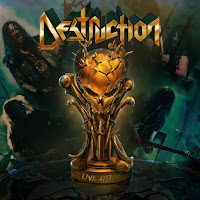 It seems like only a year and change ago I was reviewing another Destruction live album, and so I was: Born to Thrash. Perhaps it is a sign of these COVID times that bands and labels are helping fill the void by pushing out contractual fillers, live albums or compilations, and there isn't really a need for it beyond what limited profitability or collectible format they might manifest, or maybe the Germans just had a whole bunch of ideas for live albums they wanted to produce. Either way, the Live Attack hails from a live-streamed Swiss gig, it's available on audio or video formats, and frankly quite a lot of material is presented here, nearly two hours and 22 tracks worth that span a good deal of the band's catalogue, with a good emphasis placed on the classics but also no shying away from some of their more modern pieces.

The lineup on this was Schmier, Mike, Damir and Randy Black on the drums, and the production is packed with energy, although I found some of the mix levels a little sloppy. The drums are set at this perfect level, and the vocals are very loud and obvious, and they sound positively nasty. I do feel that the guitars suffer a bit, hanging just below where I'd like them, but you can still follow the contours and if you already know all the tunes it'll obviously help. The leads are a bit brighter and louder and cut right through where they need to. Where the drums fade out a little you can make out the rhythms better, but I just think they could have been cranked to give this thing even more power. I have absolutely no problem with the track selection, as its got a lot of the 80s stuff I adore, as well as giving me the two huge hits from my favorite Destruction album, The Antichrist. On size alone, this is also huge, so you'll get plenty of spin out of just trying to make it through the two discs just one time.

Of the half-dozen or so live albums Destruction has put out, though, where does this one rank? I was personally psyched to see a lot of the live streaming/performances these last couple years, there were some that really stood out for me, but I don't know that I needed them transformed into product, and while the Germans have done an elaborate job here, this one doesn't even stand out so much to me. Even the recent Born to Thrash sounded a little better for these ears, but to me the standard will always be Live Without Sense from back in 1989, one of my favorite thrash lives ever. It just sounded more virile and acidic back then, not that the band has lost its touch, but I think if I want to invest in a new live product from them, any average set just isn't going to cut it, I'd want an immaculate mix, a load of crowd energy and a performance for the ages. While elaborate, Live Attack just isn't that, at least not in the pure audio format I'm covering.