Varathron - Glorification Under the Latin Moon (2020) 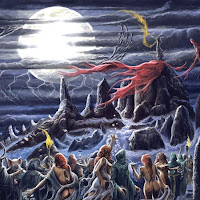 Live records come and go from more popular acts stuffing up their contracts or feeling an overzealous need to shower such products upon the masses, but getting to hear one from the mighty Varathron is a treat, because it's just not something I'd expect. Recorded in Brazil back in 2019, this one also stands out because the band includes a full run though its classic His Majesty at the Swamp album from 1993, with a few other formative tunes on there ("Genesis of Apocryphal Desire") and then a few newer pieces. Fine by me, because this is not a band that has lost its touch, and efforts like Patriarchs of Evil, Untrodden Corridors of hades or Stygian Forces of Scorn are just as formidable as the efforts they produced during the rising tide of Hellenic black metal 20-30 years ago.

To top it off, Glorification Under the Latin Moon actually sounds pretty damn good, without ever sounding over-mixed. The drums, synthesizers and vocals are all prominent, but the guitars also shine through, especially since they're so melody-focused and the effects on the rhythm and lead tones just pop right into the atmosphere. This sounds like it was truly a treat to experience, with a solid chunk of picks from their most recent work Patriarch of Evil ("Tenebrous", "Saturnian Sect", "Ouroboros Dweller") all sounding fantastic, and then what everyone was looking forward to, a 40 minute odyssey into Greek black metal nostalgia which sounds like it belongs back in the dingy crypts of antiquity, and I mean that only as a complement. Stefan's vocals sound so gnarly and awesome, a natural product of that Tom G. Warrior gruff rawness, and the keys and guitar on tracks like "Son of the Moon" and "Unholy Funeral" really dazzle. I mean, guilty admission here...I probably enjoyed hearing these tracks in the live format even more than I did listening to them on the studio incarnation of the album almost 30 years ago...

In fact, this might be the best live Greek black metal album I've ever heard? Lucifer Over Athens from Rotting Christ was pretty solid, but this is just amazement. I mean Juanjo's cover art alone might be worth the entry price, giving it a vibe very similar to Walpurgisnacht or the first few Necromantia records. That the performance and selection is so great is merely icing on the cake. Varathron is not a band that makes many missteps (Crowsreign debatable), and this is top shelf. Hear ye this or suck!