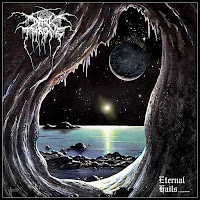 Darkthrone has long been one of my favorite bands on Earth for a number of reasons, one of which is that you never know quite what they're going to put out next, and their unwillingness to constrain themselves into a particular niche these last 30+ years has kept them strangely refreshing. Granted, there are 'blocks' in the Norwegians' catalogue which all conform to particular ideals, and I'd say that their most recent three-album run of Arctic Thunder, Old Star and Eternal Hails... has been attempt to bridge back to the rudimentary black metal aesthetics that not only defined their most popular career phase, but impacted an entire genre that now numbers several generations. And yet they retain some of the speed, doom, heavy metal and punk diversions that they've been exploring on the way to get back here.

Eternal Hails... makes an interesting contrast to Old Star, because while that was quite a bold and well produced effort among their discography, this album seeks to repress that, quash the band back to their primitive roots, to smoosh together a lot of their varied styles into a recording that sounds like they could have just hashed it all out on a Friday night. The rhythm guitar tone has a very Hellhammer feel to it, if cleaned up a bit, and then they combine this with the tinny, raw drums and some heavily effected and just barbaric vocals circa Nocturno Culto. The perfect example of all this is "Hate Cloak", one of my favorite tunes on the album with its super-simple central doom riff that yet still feels like the aforementioned 80s precursor to the black metal genre. Another I really enjoyed was "Wake of the Awakened", which has a faster pace and sounds like a mashup of stuff you'd hear on Old Star and The Underground Resistance, an extremely basic riff that propels forward and then zones out into something more haunting and doomed. Or what about that mesmeric, atmospheric melody deep in the "Lost Arcane City of Uppakra"?

You really feel as if you've stumbled across some lost demo recording as you experience this, and though not every track hits the same, it's quite hypnotic overall, which was my first impression. This duo keeps on reinventing itself, on a lot of their albums they manage to sound like a band which has just discovered dingy, extreme metal for the first time and these are the initial thoughts that they've laid out after learning a few chord and beats. And that is what makes Darkthrone so uniquely special, they can put out a new record that sounds even more primitive than their formative death metal Soulside Journey and still kick ass, because of the sheer magnitude of their authenticity. Eternal Hails... is the rare album that blows me away by NOT blowing me away, but just letting me recount my own early teenage delvings into heavy metal with a frizzy mullet, a Kramer Striker, and a 10-watt amplifier in my parents' basement, the drums thundering away purely in my imagination. Its raw imagination transfused into evil sounding, neolithic heavy/doom/black/whatthefuckever metal.

No, it's not a crown jewel in their catalogue, in fact I'd rank it among their less impactful works, but its still important, because even as I might try to marginalize it against my favorites like A Blaze in the Northern Sky, Transilvanian Hunger, or Dark Thrones and Black Flags, I'm still transported to a place that this band and few others can take me, to the very core of why I love all this metal to begin with, and that's why it's ultimately just another victory for a team with one of winningest records in my CD collection.