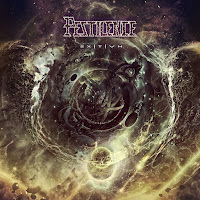 If Exitivm has one particular flaw to it, its that for most if its playtime it is revisiting or recycling a lot of the riffing tropes that originated around Testimony of the Ancients and Spheres, and that Patrick Mameli has also been more-or-less revising on all of the reunion era Pestilence records. I have seen this complaint launched at the band a thousand times for the last decade, and it does hold some truth to it, although it might be a little harsh to criticize this one group for doing so, when other legacy acts in the same medium are given praise for repeating the same riffs or records ad infinitum. But sure, a lot of the sequences here are modifications, half step intervals shifts or re-grooved riffs from the band's own lexicon, and that's the one hurdle that might hold it back from achieving the level of their formative masterpieces from before they adopted this approach in their 90s era...

But that's the ONE flaw for me, because Exitivm is otherwise a completely fucking awesome, exciting album that I must have listened through two dozen times since I got it, and I'd probably have gone more if I weren't constantly splitting my time between the tens of thousands of older records and the ceaseless flood of great new releases in the expanded metal-verse. This is a triumph for the Dutch-centered act which takes a lot of the lessons from albums like Spheres, Hadeon and Doctrine and then sharpens them into the best selection of chugs, grooves and atmospheric touches the band assembled this century (so far). Knuckle-dragging, jazzy chords splayed out in insanely catchy hooks, even if a bit predictable, while Mameli slathers over them all some of his grossest-sounding vocals yet, to the degree that I think he's just about as disgusting and distinct as van Drunen was in the old days, and the fact that Pestilence are writing such neatly-honed, almost accessible material makes them stand out that much more.

It's not so uncommon for Mameli to assemble entirely new lineups for albums in the way that Chuck Schuldiner messed around with, but this new unit locks together like perfectly oiled machinery, with Michiel van der Plicht splitting my head open with his clockwork, brutal beats. The synthed out intros and segues provide a nice escape from the hammering force of the dominant death metal, and I'd say they were the best of this sort the band has ever included, superior to the little instrumental bits on Testimony or the weirdscapes on Spheres. Because they're just better integrated into the tunes, offering a little escape and relief from the blunt force trauma that you're about to be faced with, and then even adding a little to those very brute moments ("Internicionem"). All the tracks are fairly quick, with just a few rhythmic ideas in them, normal for Pestilence, but really well plotted, and the fusion-like leads are also taut and well-executed, giving the compositions even more dimensional flair.

Ambient hook. Beating. Alien hook. Beating. Repeat for a tight 39 minutes and lather with Latin song titles to create a uniform artistic vision which is both pretentious and loveable. There was not a single moment on this record that I was ever bored or less-than engaged, regardless of whether the riff motifs felt similar to their past works, or a little more novel (I'd say this is about a 60% to 40% ratio). The production is bright and perfectly fit to this futuristic sci-fi dystopian death, and it's got to rank among my favorite Pestilence works besides the obvious first two that remain high points in all of metal and music. Mameli might not be the best spokesperson for his own band these 30 years, but when it comes down to the music I am still positively thrilled by the combination of groove and cataclysmic, cosmic tension and anxiety that this causes me. Sure I've seen this steamroller before in pictures, but it still runs me over just the same.