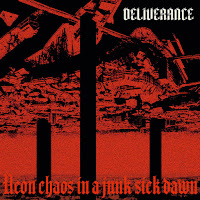 Generally when I see an album advertised as blackened sludge or sludge/black metal, I get the automatic notion that it's going to be very dredging, crushingly slow and heavy material with a rasping vocalist, and a focus more highly on the heaviness and production than on a sense of interesting riffing-ness. So I was pleasantly surprised to hear a band like Deliverance shrug off such preconceptions, with a highly varied third full-length in Neon Chaos in a Junk Sick Dawn (clearly one of the coolest album titles of the year). This is a group interested in pushing the boundaries a little wider, that's not to say that there aren't plenty of the requisite grooving doomy sludge passages throughout the staggering 62 minutes of content, but so much of it is well balanced, riff-strong and calculated to keep your brain engaged with more than straining the neck to which it is attached through leaden headbanging.

For one, the band implements synths tastefully throughout, little electronic pulses that serve mainly to complement the guitars and vocals, through a mix of brooding organ-like tones or more modern electronica vibes. They're never too brazen or dominant and they instantly give Neon Chaos another dimension forbidden to most such records, some added melodic drama. There are also cleaner, sparse minimalistic passages like the intro to one of the record's two leviathan-sized tracks, "Odyssey", which give you plenty of breathing space. When it comes to the crushing, they've got that too, but I feel that most of the nastiness comes through in the tortured intonations of the vocalist, whereas the riffs are usually well written enough to remain catchy (even when derivative), and you've got the glaze of those keys to distract your conscience while your chin nods along to those grooves. There are often little surprise chords or note patterns inserted through the rhythm guitars so they don't just become some repetitive afterthought.

The band is even competent with straight-ahead black metal progressions like they kick off the album with ("Salvation Needs a Gun"), where the organ works perfectly to saturate the moderate blasted speed with a mood of nostalgia, and then it breaks into the more arpeggiated sounding synth and groove and you're already off to the races with catchiness. The big challenge is the aforementioned titanic tunes, "Odyssey" and the finale "Fragments of a Diary from Hell", but rather than dragging on, they are clearly plotted, purposeful and loaded with cool hooks, and where it does descent into a little more space and experimentation, it's rather cool with some narrative vocals over the top, dissonant guitar ringing out, plunking syrup-thick bass strokes and other earworms that keep you satisfied until they break into the excellent climax (of the latter), which is probably the peak of the whole experience. The album isn't always on fire, but overall it's quite well done.

Posted by autothrall at 9:40 AM