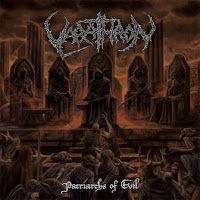 It can't be any coincidence that, ever since Rotting Christ started to take a downward swerve in quality, their countrymen Varathron have really picked up their slack and gone on what must be the most consistent and memorable run of their career, first with the excellent Untrodden Corridors of Hades and following EP The Confessional of the Black Penitents. It's almost like they snuck into the Tolis brothers' minds one eve and devoured their dreams and aspirations, then converting it into their own creativity. I jest, but boy has this band translated this classic Greek black metal style into something truly splendid and fulfilling through the sorts of albums you want to listen to front to end repeatedly, picking out the details each time as they deliver nothing other than solid, worthwhile riffs.

Again, this is not super blasting black metal territory, they can pull that trick out of their collective hats if they need to, but this is more about the varied, slower riffing which draws a lot from thrash metal, but due to the exotic note and chord patterns, the raspy vocals, the choirs and synthesizers and the mighty drumming which feels like the advanced course to Celtic Frost or Therion's foundation. Considering the amount of musical satisfaction you get, they rein a lot of the tracks in around 5-6 minutes, with the exception of the finale, "Ouroboros Dweller (The Dweller of Barathrum)", that clocks in over 8. Within such a humble span they get a lot accomplished, each set of riffs feeling like it tells a complete, grandiose story, and it does, a saga of magic or mystery which transports your mind back several thousand years despite being conveyed to you with instruments that weren't used in this format until fairly late in the 20th century. While the great lyrics often delve into the 'evil' that the album title hints at, Varathron is musically pretty consonant and warm on this record, and I think it'd honestly make a great gateway for fans of epic heavy/doom metal looking to break into the black metal field but striving to avoid the cliches they might not like of lo-fi production and cold Nordic blasts (their loss!) It's just that universal of a sound, despite being part of such a tight regional style.

All the instruments sound clear and effective, and the band can seamlessly mix in acoustic passages to heavier riffs, while Stefan Necroabyssious' primitive grunts are far more effective than you'd think from his range, somehow managing to sound just as distinct and glorious as the brighter melodies of the instruments, only with that crude edge. I don't know that the riff level here is such that every pattern is insanely catchy by itself, but combined into the whole of Patriarchs of Evil, there are few notes here that I'd really want to change. It all serves the mystique of the band's occult explorations well enough that you can forgive an occasional dud, and I admit that this is one of those albums that has continued to grow on me since I first started listening. I'll rate this one even higher now than I would have one year ago, and I think it's very close to being on par with their last (and my favorite) full-length, missing only by a fraction which I'd attribute to just having a stronger connection to that mildly darker experience. But stylistically this is on point, and an essential Greek black metal disc for anyone into their past works or those of their better-known, ailing countrymen.