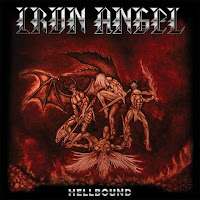 Hellish Crossfire was such a sizzler of a second tier speed/thrash album out of Germany, that all Iron Angel's future steps towards a milder sound were bound to end up in disappointment. To their credit, Winds of War was still a solid offering, just lacking the infernal glee of its predecessor, and in the 30 and change years since that was dropped, with only a handful of compilations and a bad demo in the interim, I admit that I did not ever seriously expect that I'd encounter new Iron Angel studio material again, nor was I even particularly interested. The debut has remained a staple in my rotation ever since, especially when I'm looking for a backup to the better known Teutonic thrashers. Well. I was dead fucking wrong, and to an extent I am happy to have been, because Hellbound, while not about to supplant the cult classic debut in any category, is a very competent attempt to get back to the basics and shove some metal straight up your nethers.

Yes, the way this one works is how it shoots for not only old school riffing structures and vicious, lived in, authentic German speed metal vocals courtesy of Mr. Dirk, but how the production on the album really matches those things and sends you back, without being too blatantly retro. The guitars sound very organic, without being overbearingly saturated, and even though they're mostly playing the sorts of riffs we've heard from this sub-genre for like 40 years, they're absolutely timeless in these players' hands, even more impressive because both of these dudes, Robert Altenbach and Mischi Meyer, are new to the band for this freaking album! The rhythm section here is definitely playing at a power metal level, with thundering kick drums and arguably more energy than back in '85, a firm presence to the bass even though it kind of seems subservient to the other instruments. The riffs here are almost all pretty pure heavy/power metal, but they don't sound overbright or overpolished, so it more resembles the Priest-laced power that was emerging in the 80s rather than the bubblegum stuff like Dragonforce, and within that realm they've got a diversified riff set that makes for a well rounded effort, from the killer "Judgement Day" to the warlike setup of "Carnivore Flashmob" (what a title!).

Dirk Schröder sounds pretty amazing, I mean he's a lot less rough around the edges than he was on the mighty "Metallian", but still has a nasty edge to his voice when he wants, and he's easily the highlight of the record. Some of the backing gang shouts hit, others miss, but overall the verses and chorus lines are very well put together, and when the bands gets to its most dirty and speed metal in cuts like "Blood and Leather" or "Ministry of Metal", it's pretty awesome. Honestly this one falls in between a Hellish Crossfire and a Screaming for Vengeance, or rather a cruder Painkiller. If that sounds like what you'd like to hear from an Iron Angel comeback then you're in for a treat. Not perfect by any means, but seasoned and fearless, certainly a step above their sophomore in '86, and enough to forgive the lackluster attempts at new material since that point. It also looks a little bland, the cover art choice was a safe one if you've seen their first two records, but who cares when I can crank this on the car stereo, lower the windows and feel like I'm 16 again, just got my license, my hand-me-down jalopy and can maybe, just maybe imagine that I'm cool enough that a girl might talk to me.