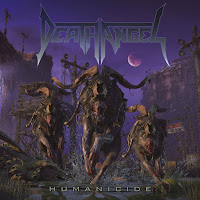 Upon first glance I admit I didn't find this latest Death Angel album to be all that appealing. The Humanicide title seems trite and cliche for a thrash disc, and even though the artwork for these three wolf mascots is on point, I thought it also felt a little generic that three of the last four albums they put out had nearly the same artwork, with slight shifts in color scheme and whatever part of the post-apocalypse they were pawing their way through. After popping in the disc, though, most of my worries disappeared, because it turns out this is just another example of the modern Death Angel doing its homework and getting it right. Maybe not as right as on the two albums before it, which it seems to be a hybrid of, but it was generally a good listen with a lot of dense, headbanging and yet another palette of powerful riffs by the Cavestany/Aguilar team that moves in a lockstep you rarely hear outside of bands like classic Artillery.

This record moves. And it is angry. West Coast thrash metal evolved to incorporate a wide array of influences, between technical thrash and groove metal. Flashy, well-written solos sputter out from the gapless network of energetic rhythm patterns, while the bass and drums keep really damn busy forcing it all into the same concrete lattice of impenetrable power. I will say this album has a higher ratio of forgettable riffs than the two before it, but not for lack of trying, it's just that its particular configurations didn't quite worm their way into my earholes as much. I mean, when you get down to it, while a lot of the material here is very well arranged, it's just not so catchy and feels like a lot of material you've heard from decades of thrash bands, only paraphrased into more punchy cuts. Mark Osegueda's vocals here feel a little more pinched than the last couple discs, and there were also some lines where I thought he sounded so much like Erik A.K. from Flotsam & Jetsam that I had to look up that he hadn't taken over those duties for this album. Weirdly, I think I was more into the drums on this than the last two albums with Will Carroll, perhaps just a dash more potent personality.

They bring in a few guest soloists like Alexi Laiho of Children of Bodom and Jason Suecof of Capharnaum (and recording engineer of many well known records), but I hardly noticed because the band's own guitarists could probably have done with them equal flair. I dug quite a few of the songs, but if I were to pick a few out of a lineup with the three albums before it, they'd have to be "The Pack" for its more interesting rhythms and well timed gang shouts, and "Revelation Song" because it very much took me by surprise with its huge heavy metal riffs and great, groovy rhythm bridges during the leads. Basically the tunes where they sort of break off from the dextrous clip most of this material is flying past at. But in the end, Humanicide is well in line with Relentless Retribution, The Dream Calls for Blood and The Evil Divide as the most consistent streak the band has ever had in its decades of existence. No, I'm not going to pull this off the rack over "Evil Priest" or "Voracious Souls", but any of these four albums would sound great through the car speakers when I just want a thrash album that cares about what the fuck it's doing. When this phoenix finally emerged from the creative ashes about a decade ago, it decided it would stay aloft.