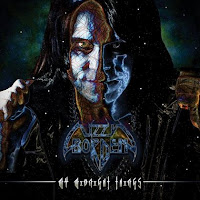 I've gotten so much enjoyment out of the first four Lizzy Borden albums throughout the 80s, that I could never begrudge if the band had just stopped there and never performed another note. Yet there is quite obviously a fire still lit beneath Mr. Borden and his troupe, and once they got back on the horse with 2000's Deal with the Devil, the only 'average' record in their catalog, there was a noticeable rebound in quality, the band staying very active on tours and doing what they love even if they've never quite hit the higher profile of other heavy metal legends from both sides of the pond. 2007's Appointment with Death was a good effort, almost as good as some of their seminal records, and I have to say that this newest disc, My Midnight Things, if not the most striking material they've ever released, sounds fairly capable as a band which heralds a lot of those 80s hard rock, glam and heavy metal aesthetics transplanted into the year 2018. It's not a total faceplant, but certainly a humbler and less ambitious project than its predecessor.

The core lineup here is down to just Lizzy and his brother Joey Scott Harges, with the former handling all the instruments other than a couple keyboard parts, and I think you can feel a little of the lack of intricacy or impressive guitar licks that defined career highs like Visual Lies and Master of Disguise, but what is performed here is at very least in line with what a modernized vision of the band might be. I'm occasionally reminded of the 90s Queensryche material, which devolved into a sort of progressive alt rock still carried by Tate's vocals, only Lizzy Borden keep things a little more metal and anthemic front and center, and just better. There are a lot of pretty obvious riff lines on the album, with predictable progressions to choruses, and the leads here are far too simplistic and don't do much to make an impact compared even to the chords surrounding them, but some of the stuff is still pretty sugary, catchy and dramatic. As for his voice, I'll once again make a comparison to Geoff Tate, since the two are quite similar in inflection, and also that Lizzy, like Geoff, isn't quite as screechy and wild as his youth, but remains very competent in rage, and there are certainly a lot of his self-harmonies here which could have appeared in the later 80s and nobody would be the wiser.

My Midnight Things clearly has a more 'rock operatic' approach to it that most resembles Master of Disguise, almost like a Part II to that record, with songs that aren't quite as impactful or resonant, and a tendency towards some redundancy as to how a lot of them progress. Despite that, I still felt myself getting drawn into a number of them, I only wish they had been trussed up with better lead guitars, and riffs that were a little more interesting individually, even if in a pop-like sense they do flow well as a whole. It seems like a lot more of the gaps between the simpler rhythmic components are just filled in with synthesizers, and while they're not unwelcome, they're not so compelling in most instances. Lyrically, it's about on par with Master of Disguise, hard rock lyrics with a larger than life feel to them which seems very personal to this character that is Harge's 'Lizzy Borden'. One thing I did truly hate on this one was the new version of "Waiting in the Wings", modern and poppy and more electronically infused than the original and it just does not work, even if he can still hit those notes in the chorus. Otherwise it's a passable record that suffers somewhat from lacking the full spread of weaponry that Lizzy Borden offered with a full roster in the 80s. Decent ideas for vocal hooks, solid drums, but the rest could really have been improved upon.