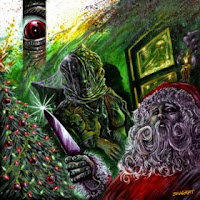 Dave Slasher's last Acid Witch EP was this really great idea that involved covering four Halloween-worthy hard rock horror movie tracks, but unlike a lot of others, who lavished praise upon it, I was just not a fan of the actual execution, even though I I was a fan of some of the original fare it was based upon, and appreciated that such songs would get some attention. Hey, nobody can question the guys' taste. This newer Black Christmas Evil EP is a similar idea, only with another particular Holiday theme, and shorter at only two tracks. This time, the presented material is original, and like a lot of the band's full-lengths, much more to my liking. I rather dug how it felt like a continuation of their very solid, original 2017 album Evil Sound Screamers, only trussed up in a Santa outfit.

So yeah, hideous lo-fi death/doom drudging that sounds enormous despite those factors. I love the integration of the cheery keyboard lines which feel like they were taken off some incidental Xmas record, or some cheesy mid-90s black metal band like Ancient. The vocals are gruesome snarls that are heard well above the music itself, and the overall atmosphere is suitably fun and still heavy. I wouldn't call the riffs in this one their best, but they are dynamic and groovy enough in a succinct tune like this to keep you from growing bored. The second tune, "Christmas Evil (You Better Watch Out!)", was my preferred of the two, opening with a sample from the trailer of the 1980 film of the same name, but then going into this classier doom structure. Lyrically, yes, each of the tracks is based on the eponymous slasher films, which is really par for the Acid Witch course and one might even hope they do a lot more such 'theme' EPs since there's a lot of turf to cover in the horror genre.

There's not a lot of meat on the victims' bones here, but it's a two track EP for $2 on Bandcamp, so there's not much cause to complain, especially when they're well enough written that they could have appeared on Evil Sound Screamers. I think the love of these films shines through in just about everything Dave Slasher and friends put out, and since my own fondness for campy old horror flicks has only grown with age it's something I look forward to. I'd also take the opportunity here to plug his solo synth/score project, which is really well done.