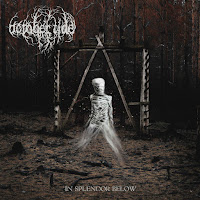 I don't know whose idea it was to come up with the new October Tide logo for this sixth record, but it was a good one, replacing the bland typeface they had before and instantly making a statement before I've even heard a single lick of the music. Strangely, I think the change also rubbed out on the compositions here. No, they are not a black metal band all of the sudden, as that logo might imply, but In Splendor Below is certainly a harder-jamming death doom record than its predecessor, the surprisingly good Winged Waltz, and I rather approve of the shift, because it offers up something a little less predictable than just steering along the exact course. Don't mistake me, there are plenty of passages here which fall directly in line with the material they've been dropping since 2010, but they clearly don't sound like they are anywhere near running out of ideas and overall progression.

There's a new rhythm section here, which might account for some of the differences, but I think this one actually takes a little more of an Opeth influence circa Blackwater Park or Still Life and imbues that with some riffs and rhythmic patterns that their countrymen simply wouldn't have thought up. So if you miss those records, I'd definitely give this one a listen. Another alternation here is how Alexander's vocals seem more fleshed out and emotional crushing. Rather than a static, competent guttural, he's sustaining longer growls that shift more in pitch, ebbing and flowing like a tortured shoreline under the tides. There's more of a rasp to some of his lines, and it's just far more risky and involved than what he was doing on the last one, and to me an improvement. As far as the quality of the melodies and harmonies, I'd say this one is in lockstep with its elder sibling, not being more memorable although at times it does cover a little darker terrain. The drums are also noticeably more busy, which naturally suits the shift in intensity, without losing any of the subtle skill that was on exhibition in their recent past.

In all, they just take a lot more chances, and the songs end up a lot more diverse than either Winged Waltz or Tunnel of No Light. Rhythms break and resolve, note patterns get more complex and can take a few listens to really absorb, and it's very far from predictable...I had no idea what was going to happen around any corner, and I loved the harder hitting direction taken on tunes like "Stars Starve Me". But don't get me wrong, the record as a whole flows just a smoothly as its predecessor. Like the last album, the lyrics are actually pretty well written and can be interesting to read along with as you listen. Sure, they've dowsed with the same tales of woe you're going to expect from this niche of doom metal, but that doesn't detract from how you'll actually feel like they were penned with some genuine emotional ballast rather than just configuring a bunch of words that fit the style. All told, In Splendor Below is another very good album, well worth the time if you're into these dramatic and melodic Swedish death doom bands, just as fine as Winged Waltz, and to some will undoubtedly prove superior due to the increased level of instrumental activity.