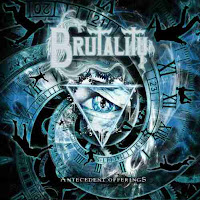 Antecedent Offerings is essentially a limited run, 500 copy 7" collectors' item in which 3/4ths of Brutality's 'classic' lineup revisiti a track each from their seminal offerings Screams of Anguish and When the Sky Turns Black and re-record them to see how they can be performed with over two decades' accrued experience and proficiency. Perhaps even a dash of contemporary studio 'wizardry', which has presumably also come some ways since the 90s (in either a positive or negative direction, depending who you might ask). As such, it's not like the band has fully committed to remaking a lot of their catalog, they just hand-picked two cuts which I'd assume are ones fans might want to hear in this context, and had at them.

Admittedly, I find both of these renditions a little dull, lacking the crushing potency of the original incarnations. The mix is quite consistent, the riffs performed well, perhaps even more 'balanced' across the speakers, but as soon as I go back to the brighter, album version of "Crushed", it just emotionally and sonically violates this new version, sounding like the genuine Florida death metal that put the band on the map in that 'second string' of bands beneath the legends like Morbid Angel or Death. The older version does feel a lot more youthful, maybe even disjointed in a few of the transition areas, and the remake is smoother in that area, I'll grant it, but the overall mix just has nowhere near the same level of energy for me. This is doubly the case for "Artistic Butchery" which also seems like a more lifeless version, and I get that it's 'death metal' haw haw haw but really there is no point to hearing the new over the original. The one thing that does remain very consistent between the two eras is the vocals, which sound almost identical on a good number of their lines.

So while this is only intended as a limited edition collectible and nothing to take so seriously, I have to say it doesn't do much for me whatsoever. The one positive is that it made me listen through those first two records again, which are slightly underappreciated gems from the 90s era, but I wouldn't go out of my way to hear either of these again. They don't suck in terms of production, but lack the personality in 2018 that their forebears had in 1993-1994. Skip it and listen to those albums, or even their last record Sea of Ignorance, which is much more exciting with its newer material.